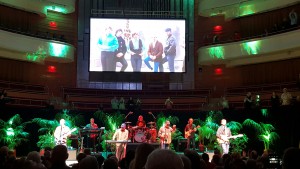 If nostalgia can be defined as a wistful and sentimental desire to return to an often happier time in one’s life, last Sunday’s Beach Boy’s concert at Segerstrom Concert Hall fit the bill.

With nearly three hours of surf, car, and love songs that are as rooted in our Southern California consciousness as In-N-Out and the 405 Freeway, the show was a true musical trip down memory lane, celebrating the band that remains the very bedrock of the SoCal music experience.

Accompanied by a highly-skilled backing band, original members Mike Love and Bruce Johnston (distinguished for any out-of-the-loop onlookers by their matching “The Beach Boys” baseball caps) treated fans to an impressive 45-song set that ran the gamut from the group’s biggest hits, to deep cuts and covers of influential acts.

All the essentials were accounted for: “Surfin’ Safari,” “Surfer Girl,” “Be True To Your School,” “Little Deuce Coupe,” “Help Me Rhonda,” “Fun, Fun, Fun,” “Good Vibrations,” “Kokomo,” “409” “Sloop John B,” “The Warmth Of The Sun,” and “Barbara Anne,” with the anthemic “California Girls” and the magnum-opus “Wouldn’t It Be Nice” getting the biggest audience reaction of the night.

For the more devoted fans, the real treat was hearing gems like “Farmer’s Daughter,” “All This Is That,” and the back-to-back “Til I Die,” and “Disney Girls” off of the oft-overlooked “Surf’s Up” album from 1972 (the latter being a nice spotlight moment for Johnston who wrote the song and was still able to grab almost all of the high notes).

The innocence of these classic tracks combined with the poignant irony of a 74-year-old Love singing lyrics like “What will I be/when I grow up to be man?” only emphasized how many years have gone by, for the band members and the audience alike, and just how many memories those iconic songs have been the soundtrack of.

Now for the elephant in the room, or more accurately, not in it.

Brian Wilson, the inarguable heart, soul, and brain behind The Beach Boys (and the last living Wilson) wasn’t present, along with guitarist Al Jardine. Wilson hasn’t toured with the band long-term since the 60’s, and all surviving members haven’t performed together since the 50th anniversary shows in 2012. His extraordinary presence was obviously missed, but rhythm guitarist Jeffery Foskett, who has played with the Beach Boys, including Wilson, for years, did an admirable job on vocals, filling in on both Brian and Carl-led songs, while lead guitarist Scott Totten and bassist Brian Eichenberger rounded out the iconic harmonies so essential to the Beach Boys sound.

Even without a single Wilson physically present, the family spirit was tangible all throughout the concert hall. Love brought his own daughter Ambha out on the stage for a touching rendition of “Sail On Sailor,” emotional tributes to Carl and Dennis Wilson included video and audio of them singing “God Only Knows,” and “Do You Wanna Dance” respectively, and grandparents with their grandchildren danced in the balconies, a testament to the continuing legacy of this essential band.

During “The Ballad of Old Betsy,” Love sang “She may be rusted iron/but to me she’s solid gold.”

Fitting words for the jalopy he’s talking about in the song, but also the memories and recollections every member of the audience experienced all over again, as soon as Love and Johnston took the stage.