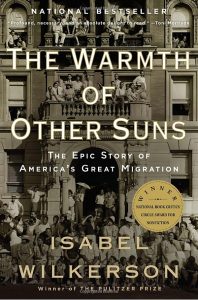 If you’ve paid attention to the news lately, you surely will have noticed that scarcely a day goes by that we don’t have immigration featured prominently in our dialogue. As we adjust to a new administration, the topic has become even more widely considered.

What do we do with the wave of humanity fleeing the circumstances of their birth for the opportunity at a better, safer, more fulfilling life? It is a question being asked the world over – how do we absorb this influx of immigrants? How do we house them, support them, employ them, and help assimilate them? Do we assimilate them, or do we modify our mores to include theirs? Ethically, politically, and logistically, what is the answer?

When we consider this type of large scale migration, we tend to think of international events such as Post-Holocaust European Jews relocating to America, and refugees from Syria and the Middle East fleeing an oppressive and murderous regime.

What we often don’t realize is that here in America, we had our own massive migratory event, in which six million people uprooted themselves, and relocated for many similar reasons: freedom from oppression, safety for their families, and the opportunity at a better lot in life.

Taking place between 1915 and 1970, this event has come to be known as the Great Migration, and it encompasses the time when African Americans fled the oppression of the post-reconstruction South for the promise of the North.

This massive relocation played a major role in shaping how life would play out, both in the North and South. The exodus of much of the work force pressured the southern states towards social change, advancing the civil rights movement, while at the same time, the converse influx changed the landscape of life in the urban North.

The Great Migration brought us jazz, and Motown, and gave birth to John Coltrane, Jimi Hendrix, Toni Morrison, Jesse Owens, Malcolm X, Denzel Washington, and Michelle Obama, among others, all of whom were children or grandchildren of the migration.

While it was a watershed period in American history, families of the Great Migration, like other immigrants both before and after them, discovered that the great cities of the North didn’t always deliver on their promise.

Though they could live without fear of losing their life for looking wrong at a white person, they still saw oppression. A black family had certain neighborhoods they could live in, and they weren’t often the “good” ones. Things like mortgages weren’t readily available through the usual channels, which made the journey towards that better life a longer one.

While this period undeniably colored the culture of America, it has remained under-discussed in the ensuing years.

Award-winning journalist and author, Isabel Wilkerson, herself a child of the migration, took issue with that, and spent 15 years, speaking with over 1,200 people to produce the definitive title on the subject, her 2010 book, “The Warmth of Other Suns:  The Epic Story of America’s Great Migration.”

Now, Wilkerson is visiting Newport, as a guest of the Newport Beach Public Library Foundation’s Witte Lecture Series. She will be speaking at the Central Library on Friday and Saturday, April 28-29, in a lecture entitled, “The Great Migration and Immigration.”

In her lecture, Wilkerson, the first African-American woman to be awarded the Pulitzer Prize, will discuss the parallels between the Great Migration, and the current immigration issues we face, how the two differ, and also, what we can learn from the experience of our own migrants.

Friday evening’s engagement will begin at 6:30 p.m., and includes a wine and music reception, lecture, Q&A, book signing, dessert, and coffee. Tickets are $50 each, or $45 for foundation members.

On Saturday, attendees will enjoy the lecture, Q&A, book signing, and dessert, beginning at 2 p.m. Tickets for this event are $35, or $30 for foundation members. Teachers and students can obtain discount tickets for either day for just $20 each.

For more information on this not-to-be-missed event, please visit nbplfoundation.org, or call 949-548-2411.