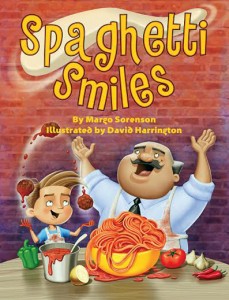 Former Harbor Day teacher and local author, Margo Sorenson has done it again. To celebrate the release of her new picture book, “Spaghetti Smiles,” Sorenson paid a special visit to a group of lucky students at Andersen Elementary School this week.

Although I am just a few years north of the target demographic, I was able to tag along, and watch as she shared her new adorable tale with the equally adorable audience.

“Spaghetti Smiles” is the story of Jake, a little boy endeavoring to help his Uncle Rocco find a new neighbor to occupy the space next to Rocco’s Italian Restaurant. If Rocco doesn’t find a neighbor, he will have to close the restaurant.

The only problem is that while the whole town loves to eat at Rocco’s, they are afraid that being his neighbor would allow his wild and crazy style to spill over in to their own businesses.

Ms. Cash at the bank was afraid her patrons will be given pepperoni slices instead of quarters, and at the post office, Mr. Stamply fears lasagnas ending up in his airmail. Over at the gas station, Mr. Pumper foresaw gas tanks being filled with tomato sauce rather than gasoline.

Jake was just about out of ideas. He feared the end of Rocco’s was just around the corner. Then, he noticed a new bookstore. Although full of books, the store was noticeably empty of customers. In fact, Mrs. Page feared she might also face losing her store.

Jake had a way to save both stores. If Mrs. Page moved next door to Uncle Rocco, customers could have spaghetti for dinner, and buy a book for dessert. And, although she feared

finding noodles being used for bookmarks, Mrs. Page agreed that as long as people were enjoying reading, that would be OK.

And so, a little boy who loved both reading and ravioli brokered a partnership that solved everyone’s problems.

After sharing the story with her young audience, Sorenson spoke to the kids about the writing process. She told them that we all have ideas in our heads, and compared those ideas to seeds. She explained that, just like seeds, our ideas need to be nurtured in order to thrive. With her magic watering can, she illustrated this concept by wandering amongst the children, sprinkling their ideas with “fertilizer” in the form of confetti.

After hearing from Sorenson, the students were given an extra treat, as “Spaghetti Smiles” illustrator David Harrington was also in attendance. He told the children about how he tells a story through pictures instead of words, and shared that he first began drawing when he was only about seven years old.

Harrington shared some of his illustrations with the audience, then drew a brand new character, based on the suggestions of the students, that showcased how artists use software to help make their illustrations.

While I doubt that Harrington noticed this, I spied a student in the back of the group who no doubt soaked up his every word. While most of the audience listened raptly to the story, this young girl had her clipboard and pen at the ready, doodling on her drawing pad for almost the whole presentation. I can imagine that for a budding young artist such as this little lady, hearing from a professional was pretty exciting.

By sharing their passions with these primary-age students, both Sorenson and Harrington allowed them to see what is possible when you pursue your dreams, and refuse to give up.

In one last special surprise, a parent attendee approached Sorenson after the presentation, and introduced herself as one of the former teacher’s literature students from her time at Harbor Day. How special that Sorenson was able to share her expertise with both a former student and the next generation all at once.

For more information on “Spaghetti Smiles,” or to learn more about Sorenson, please visit margosorenson.com.