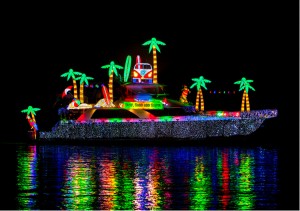 The Christmas Boat Parade is looking for a few good…boats.

Up to 100 vessels ranging in size from kayaks to super yachts will strut their illuminated and animated stuff along a 14.7-mile course in the 106th Newport Beach Christmas Boat Parade Dec. 17 through 21.

Named one of the “Top 10 Holiday Happenings in the Nation” by the New York Times and among “The World’s Best Christmas Parades” by Conde Nast Traveler, this year’s theme of “Deck the Hulls with Bows of Jolly” most assuredly will sustain those accolades.

There’s still time to register to participate in the parade. Entrance fee for all vessels, no matter the size, is $35.

Entry forms can be picked up at the Chamber of Commerce office, 20351 Irvine Ave., Suite C-5. There is a mandatory skippers’ meeting December 10 at 6 p.m. at the Newport Dunes Waterfront Resort.

Cathy Vick and Rob Meadows, owners of the 86-foot Ocean Alexander, “Last Hurrah,” will be competing once again in hopes of winning their fifth-in-a-row Grand Sweepstakes trophy.

“We’re thrilled to again be participating in the Newport Christmas Boat Parade,” Vick said. “Our team of elves has been preparing our boat to share Christmas cheer throughout the harbor, and all of us are anxious to witness the joy that all the beautifully decorated boats bring to Newport.”

This year, comedic actress Leslie Mann and singer/actor Mark McGrath (of Sugar Ray) have been named as the first-ever Grand Marshals.

In another first, this year’s Rose Queen, Madison Tripett, and her Royal Court of six princesses, will also participate in the boat parade.

Entrants in the parade register their craft in 12 categories of competition, some of which include Sweepstakes, Best Humor and Originality, Best use of Lights, Best Animation, Best Sail Boat and Power Boat, and Best Boat under 30 feet.

A number of entrants spend more than half-a-year designing and building out their “floats,” often at a cost of more than $50,000.

The parade begins at 6:30 p.m. off Bay Island, and wends its way through the harbor, ending where it began at approximately 9:30 p.m.

Perhaps less publicized, but certainly no less colorful, is the Ring of Lights competition, where Balboa Island residents festoon their homes from roofline to property line with dazzling arrays of lights in creative holiday scenes that flash and dance to entertain promenaders and boat passengers alike.