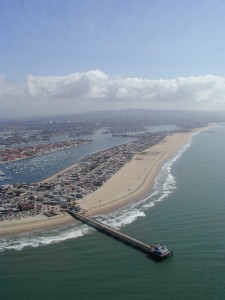 More than 100 residents packed the former city council chambers in Lido Village, with many standing in back. Mayor Ed Selich and Councilman Scott Peotter attended the meeting.

Fischbacher, introduced by Chief of Police Jay Johnson as “he who knows all things traffic,” focused his talk on gridlock that occurs down the peninsula during media induced events such as “Big Wave Days.”

In order to get traffic to flow better, a new traffic routing system was implemented. Fischbacher credited Deputy Chief Dave McGill, who pitched an idea that sounded crazy but actually ended up working.

To ease the chokepoint at East Balboa Blvd and “G” Street, McGill suggested closing off eastbound Balboa, sending traffic onto “G” street down to Ocean, and then looping back to East Balboa Street.

They tried it, and the plan actually relieved traffic so emergency vehicles, if needed, had clear access. The plan was successful all around because it utilized limited resources and could be done on the fly when traffic increased on a busy weekend.

Fischbacher also explained to the residence an area has been staged at the very end of the peninsula when media events, such as heavy surf conditions, occur. It gives space for their trucks instead of having to pull out into the wedge in heavy crowds.

A frustrated resident suggested solving the problem by stating, “Why not keep the media out permanently?” The audience responded with waves of applause.

Another resident commented on the hour-long drive from Lido to the peninsula on those heavy traffic days.

Fischbacher sympathized and said they are constantly trying to improve the traffic situation such as synchronizing lights, so traffic coming on the peninsula is slowed down and traffic leaving the peninsula is sped up.

He suggested visiting Nixle.com, a service that offers notifications for everyone to receive traffic alerts.

Before Fischbacher’s traffic talk, Chief of Police Jay Johnson spoke about the city’s crime statistics and pointed out that last year the city had over 11 percent decrease in Part 1 Crimes, making it the fifth year in a row of reduced crime and the lowest crime rate on record.

He went on to state that 37 percent of the city’s arrests are located in the peninsula where only 13 percent of the population lives. This section sees the highest call volume compared to larger geographic areas in the city.

Not captured in the Part 1 Crimes but equally important to the community is quality of life issues, with ABC licensing on the forefront. Johnson mentioned the peninsula is oversaturated with liquor licenses. There is one license for every 95 residents, making it 99 percent higher than the overall city average.

The statistics showed that there were 467 arrests made for drunk in public on the Peninsula in 2014. This totaled 68 percent of all drunk in public arrests made citywide (1,172) that year. The percentage of citations issued for alcohol-related offenses and public urination was also disproportionately higher when compared to other areas of the city.

Adopting a bit of humor, Johnson noted that 49 citations for public urination were issued on the Peninsula last year (84 percent of the citywide total of 58 public urination citations), and to actually get a citation for that offense, an officer has to witness it. “That’s 49 people who urinated in front of a police officer,” he said, garnering laughter from the audience.”

A more sobering fact: the city saw a total of 17 rapes in 2014, with 10 of them on the peninsula. Johnson noted none of them were “stranger” rapes, but most were alcohol related.

It was also made clear both he and Mayor Pro Tem Dixon are not trying to squeeze out business owners with ABC licenses. “It’s about making them accountable, making them responsible,” he said.

Mayor Pro Tem Dixon spoke about the many good operators on the peninsula making a strong contribution to the quality of life. “We want to showcase those operators,” she said.

Johnson also explained the Chief of Police has to approve the request for a license, yet the situation gets to be a bit dicey when businesses such as new hotels and restaurants are part of those requests.

“Where does one draw the line?” he asked and added, “It really needs to be the community that makes the decision through their elected officials.”

On March 10, the city council is holding a study session to listen and discuss these issues with the residents.