As Ralph Waldo Emerson so famously stated, “nothing great was ever achieved without enthusiasm.”

And while Emerson certainly knew a thing or two about what some describe as an intense state of possession, it was the ancient Greeks who started it all, etymologically speaking, for the roots of “entheos” go deep, with meanings that translate variously as “the god within” or “the fire of the gods.”

There’s no doubt that that same inspired spirit is the spark of the heart-in-your-mouth, tingles-in-your-toes dance that infuses performers, choreographers, audiences. 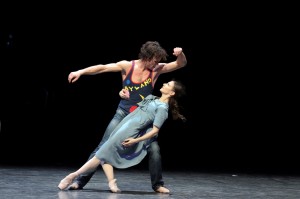 So what could be more divine than the star-studded quintet of luminous artists and companies set to grace the stage at Segerstrom Hall for Segerstrom Center for the Arts’ upcoming 2013-2014 International Dance Season, poised to ignite on November 6 with the highly anticipated World Premiere of Diana Vishneva: On The Edge.

Much like the creation of a work of art, there is an element of choreography to the designing of a dance season. Segerstrom Center Executive Vice-President Judy Morr made it clear that enthusiasm plays a large part.

“It always starts out that I don’t think I’ll put together a season,” she laughs. “It’s commitment to a vision; I live with it, I angst over it, I obsess over it, I care… I keep struggling to find the balance that I think will make it interesting. And I read about dance, everything, and watch a lot of videos. I also feel a personal connection with some people and when possible I would like to help them achieve their goals. I think that’s what helps to balance the season. But then I must have something to open people’s hearts- we must keep going forward.”

To that end, the Center- in co-production with Ardani Artists- invited Diana Vishneva back to follow up her unforgettable virtuosity in 2008’s Beauty in Motion with a program of two new pieces for Diana Vishneva: On The Edge, created especially for her: “Switch,” by Choreographer-Director of Les Ballets de Monte-Carlo Jean-Christophe Maillot and “Woman in a Room,” choregraphed by Carolyn Carlson, Director of National Centre for Contemporary Choreography in Roubaix.

Further explosions of talent – both traditional and mind-bending – continues in the New Year with two American Premieres.

After the success of this year’s “The Little Mermaid,” Hamburg Ballet returns in February with Director and Chief Choreographer John Neumeier’s acclaimed “Liliom,” based on the 1909 play that inspired the Rodgers and Hammerstein musical “Carousel,“ and Les Ballets de Monte- Carlo opens March 7 with performances of Maillot’s reinterpretation of the Tchaikovsky classic “Swan Lake.”

Center favorite, the illimitable Alvin Ailey American Dance Theater, returns at the end of March with a program of repertory highlights including – one can only hope – the bucket list must-see masterwork “Revelations.”

SCFTA’s dance year promises to finish as it begins, with all the brilliance and flash of fireworks in an already starry sky when the dynamic duo and real life couple known as Vasipova illuminate the stage in late July. Prima ballerina Natalia Osipova and principal dancer Ivan Vasiliev of American Ballet Theatre are to perform “The Kingdom of the Shades” scene from Petipa’s “La Bayadère,” Roland Petit’s “Le Jeune Homme et la mort” and a world premiere work choreographed by ABT principal dancer Marcelo Gomes.

“I don’t understand how ‘the power of dance’ isn’t there for other people,” Morr enthuses. “I think it’s so important to see dance when it is forming, in the early stages, and to see the best. This season has something for everyone; nothing’s boring, it’s all new and exciting. Our audience has come so far with us, and I think they’ll be overwhelmed by its beauty, athleticism, and creativity.”