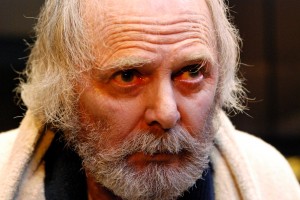 Samuel D. Hunter is a character man. That’s to say, the prolific and gifted young playwright, is a writer in love with his own characters.

This in itself is hardly a crime. Tennessee Williams surely loved his Blanche DuBois; for all Willy Loman’s pig-headed delusions, we can bet Arthur Miller loved the old guy.

His people are “decent” types, but more than a little benighted when it comes to what’s going on in their own heads and hearts. Hunter paints them in quirky, knowing, meticulously nuanced colors.

But this big-hearted affection, like an overprotective parent, gets Hunter into (dramaturgical) trouble. It’s as if having set them up in a premise that is admirable for its suspense and ethical conundrums, (i.e. the stuff of a good story), he hasn’t the heart to put them to it or through it; to allow them to suffer the inevitable consequences that the premise promises.

The result is a fascinating and entertaining slice of life but a becalmed and ultimately unsatisfying play.

We’re in an assisted living facility teetering through its final weeks.

Gerald’s Alzheimer’s is advanced; he hardly knows his own wife, and Etta is nearly at the limit of her tolerance with him. Then Gerald goes missing, wandering off (presumably) into the worst blizzard northern Idaho has seen in years.

And then we learn Gerald is not in a snowbank somewhere, he’s in the basement, and he’s dead. His demise “assisted” by his wife and their friend Tom.

This is The Big Event of “Rest,” and though many audience members will have seen it coming from a considerable distance, it is a potent Act One closer, with its promise of intriguing complications to be explored in Act Two.

But that is where Hunter drops the ball. The moral, legal, religious ramifications of choosing to end a life, even for “merciful” reasons, are dutifully mentioned but not really explored let alone dramatized.

Did Etta still love her husband? Is she relieved? Tortured with guilt? How is she changed? What about the staff?

“Rest” is loaded with charm, wry Midwestern humor and plenty of smart insights into the quietly desperate lives of many, perhaps most, Americans. What it lacks is bone structure; that magic bullet in the arsenal of storytelling that could transform a good story into a really good play.