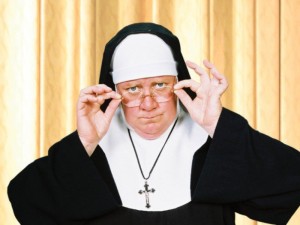 Bask in Sister’s glow this month as The Laguna Playhouse welcomes back “Sister’s Easter Catechism: Will My Bunny Go To Heaven?” for a limited engagement next week.

Just remember: no running in the halls, no talking during class, and oh yes, there may be a quiz later!

The creator of the sublimely popular “Sister’s Late Nite Catechism” series, now in its third decade, is the heavenly hilarious Maripat Donovan, who draws inspiration from her own devout Catholic upbringing and strict parochial education for the semi-scripted, anything-can-happen improvisational shows.

Directed by Mark Silvia, the old-school classroom and curriculum of “Sister’s Easter Catechism” uphold many of the series fun-filled “rules” while tailoring them to the current season—which means a history lesson on the origins of Easter rabbits (both chocolate baked and cotton-tailed), the whys of baskets and bonnets, a Q&A session about animal heroes and church-going outfits, and a titular bit of bunny philosophy.

Sartorially speaking, “Sister” conjures up some of the sweetest memories of early springtime with one simple query: “What was your favorite Easter costume?”

“This show is actually the story of my Easters growing up,” shared Donovan during a recent phone interview. “My favorite Easter costume had a laminated polyester blazer jacket with hot pink, lime-green, and white pin stripes, a candy apple green skirt, and I had asked for white go-go boots. But what I got were ugly, low boots, the kind Nancy wouldn’t be caught dead in!” she laughs.

“Ultimately, it’s a memory play,” continues Donovan. “It makes us think about things we might not have thought about for a long time. Every person, regardless of religion, had a strict teacher, has been caught talking in class or chewing gum. Everybody had that fear of being caught or yelled at. It’s that little element of terror that makes it all fun, and if they’re having fun, I’m having fun.”

“The show is a thrill to perform,” she concludes. “But one of the best things for me is that after it’s over there is a collection in the lobby for retired religious sisters. I have been impacted tremendously personally by nuns, so I try now to help when I can. We’ve had so much success (over $4 million in the past 18 years), and it has inspired me to just keep going.”

“Sister’s Easter Catechism” runs April 7 through 14 at the Laguna Playhouse, 606 Laguna Canyon Road in Laguna Beach. Tickets are $35 – $55 and can be purchased at lagunaplayhouse.com or by calling (949) 497-ARTS.