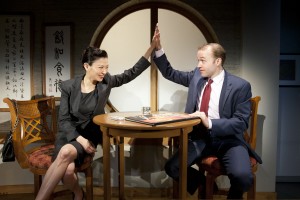 David Henry Hwang, author of  Chinglish (at South Coast Repertory through February 24) calls  his play a comedy, and funny it  is. There is no shortage of  bone-deep laughs in his East-Meets-West tale of an American businessman seeking to make a killing in China.

But in addition to writing a smart and sassy trans-cultural sitcom, Hwang has written an up-to-the-minute precis of American-Chinese economic relations, a nail-biting thriller, and a surprisingly powerful inter-cultural love story.

The program bio proclaims Hwang “America’s most-produced living opera librettist.” This isn’t surprising given that Chinglish, in its unabashed embrace of both frivolity and gravitas, feels like the product of a well-oiled operatic imagination (not unsimilar in tone to his spectacular  – and spectacularly successful —  M. Butterfly, from 1988.)
Daniel (the admirably nuanced Alex Moggridge) is an Ohio-based sign-manufacturer. Things are tight in the sign line in the Middle West of the Great Recession. (Hwang is quick to point out the ironies in how rapidly the economic tables have turned between East and West.)

Daniel is convinced he’s got one really good idea that’ll solve all his problems: China! Everyone knows about the often hilarious linguistic missteps of Chinese translations into English (known as “Chinglish”) – “Tender Fragrant Grass, How Hardhearted To Trample Them”, e.g.,  for “Keep Off The Grass.”

Landing a contract to bring a new cultural center’s “signage” up to code, as it were, (i.e. eliminating the “Chinglish”) could lead to zillions more opportunities. It’s an idea brilliant in its simplicity. What could possibly go wrong?

As lot, as it happens. First of all – suprise! – is the language barrier. (Another irony: many of the Chinese speak rudimentary English, but the American has no Chinese whatsoever.)

Much of the play’s comedy is based on these misunderstandings, brilliantly realized by surtitles in English for the benefit of the odd non-Mandarin speaking audience member.

And through it all the still genuinely inscrutable mysteries of what is still, in Kipling’s 150 year old term, “The Mysterious East.” What exactly are meant by the cryptic hints dropped by officials charged with making or breaking the deal? And what is he to make of the unsolicited assistance from the leggy, icy-cool Vice-Commissioner, Xi Yan (the superb Michelle Krusiec)…?

It is the twists and complications of these questions that gives the play its fizzy tang of international intrigue. But it is when Daniel and Xi Yan fall into a torrid affair that the play reveals its emotional center.

Hwang deftly dramatizes that in China, alas, affairs of the heart follow vastly different cultural rules, too, it seems. There is something taboo and startling in this idea: to juxtapose the Western notion of Romantic Love against the Eastern model: marriage is a contract; love is a luxury; sex is a justifiable “escape.” Which is “right”? Which is “better”? Hwang’s answer seems to be: both and neither. All they have in common is their perfect oppositeness from each other. The lovers part, stunned and saddened by what divides them.

Kipling also said: “East is East and West is West and never the twain shall meet.” Really? The siren call of globalization is putting that to the test.  East and West are meeting at mach speed these days. Chinglish shows us a funny and painful snapshot of the collision’s human fallout.