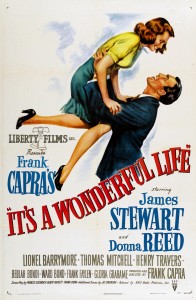 Based on the short story “The Greatest Gift” by Philip Van Doren Stern which was written in 1939, Capra does a commendable job showing us how valuable we can be as individuals and how we oft times make a greater impact on our fellow man than we realize.

Jimmy Stewart has been in several noteworthy films the past few years, including “Mr. Smith Goes to Washington” and “The Philadelphia Story.” Once again, he shows us an engaging style and personality that to me confirms he’ll be with us for quite some time.

George Bailey has an idyllic life in little Bedford Falls, NY, running a savings & loan with his Uncle Billy, played by Thomas Mitchell, who in a moment of lapsed attention, leaves behind $8,000 at the bank which George needs to cover a run on his bank caused by financial uncertainty and chaos.

George explains to his depositors that the money is not available and is tied up in mortgages from half the town, so George takes his and Mary’s $8,000 that they had intended to use on their honeymoon (which they curtailed) in order to satisfy their depositors.

When George discovers Uncle Billy’s mistake, he lashes out in anger and fear against Billy, his wife, Mary and their four children. Mary knows that this is unlike George and shows concern, and rallies those they love in town to come and help.

George is forced to go to the evil rich baron, Mr. Potter (played by the great Lionel Barrymore), who is continually trying to undue every kind act that George creates for his own greedy benefit. George tries to borrow the $8,000 from Potter, but then changes his mind.

Feeling that his life is ruined, George questions his own existence and wonders if everyone would be better without him since he is worth “more dead than alive” due to his insurance policy.

Paying attention is an Angel in heaven, Clarence, played with great humor and pathos by Henry Travers, who has been unsuccessful in getting his “wings” due to his incompetence as an Angel. George attempts suicide by jumping from a bridge, but Clarence arrives on Earth to save him and shows George what the world would have been like had he never been born.

George Bailey is the “everyman,” which Stewart excels at, and the audience cannot help but be impressed with Bailey’s kind heart and spirit.

When George sees that many people would be much worse off without his presence, including his wife, Mary, who would have never married anyone but George, retracts his wish to “never be born” and Clarence brings him back to reality.

George then is embraced by his fellow residents of Bedford Falls as they rally to his aid. There is, of course, a happy ending, and Clarence finally gets his wings.

I noticed many in the audience wiping tears from their eyes, probably due to taking stock of their own effect they have had on others.

This movie is a sure Oscar contender, and may qualify as one of the greatest movies of all times. Due to its arrival on Christmas Day, and since the action in the movie concludes on Christmas Day, I predict it will become an annual staple on those newly invented boxes called “television,” although I doubt television will ever be embraced by the general public.