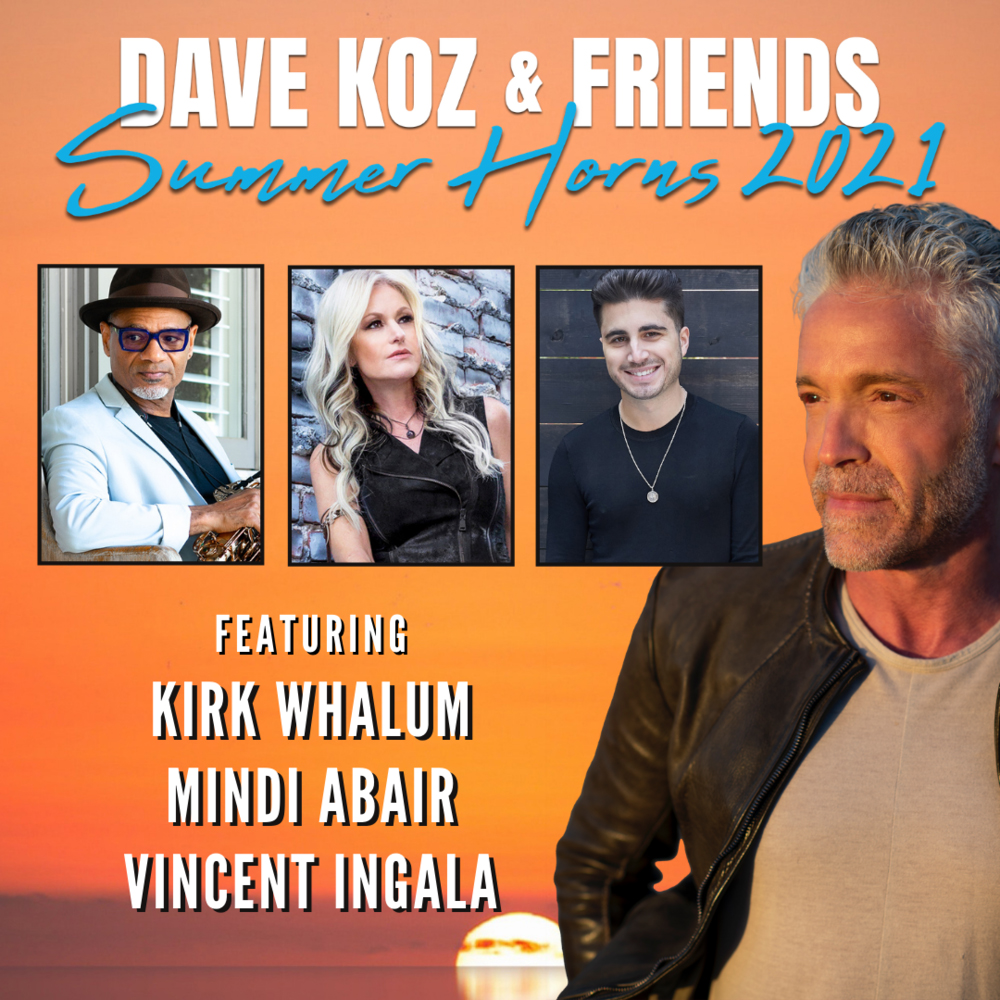 The show will feature songs from each artist’s catalog plus material from the “Dave Koz and Friends Summer Horns” album and the “Summer Horns II From A To Z” recording. Both albums debuted at No. 1 on Billboard’s Current Contemporary Jazz Albums chart.

Koz has racked up an impressive array of honors and achievements: nine GRAMMY nominations, 12 No. 1 albums on Billboard’s Current Contemporary Jazz Albums chart, numerous world tours, performances for multiple U.S. presidents, a star on the Hollywood Walk of Fame and more. The California native is also known as a humanitarian, entrepreneur, radio host and instrumental music advocate.

Koz is bringing several superstar smooth jazz artists with him on the Summer Horns Tour.

Koz is elated to be touring with such high caliber artists, and he’s been celebrating his 30th anniversary as a recording artist with last year’s release of “A New Day,” his first album of original material in 10 years and his 20th album overall.

“When the pandemic hit, I did what a lot of people did—I went to things that made me feel better, which was my feel good music heroes,” said Koz during a recent phone interview prior to launching his tour last month.

That spurred Koz to write a batch of new material, and gather musicians to make a recording, which became “A New Day.”

Koz normally tours frequently and also has an annual Jazz Cruise starring Koz and friends, but touring and cruising were put on hold due to the pandemic. However, Koz plans to resume his Jazz Cruise next May, and said that the cruise is already nearly sold out.

Koz and his Summer Horns Tour launched in Florida and has made its way to the West Coast. He plays Newport Beach on Sept. 10 and then pops over to Thornton Winery in Temecula for shows on Sept. 11 and 12.

“The Hyatt Regency has always been a special place for me,” said Koz. “My parents used to love going there, and I’ve done many concerts there. Everyone is happy to be back. So many artists were in the same boat, everyone is excited to be back to work.”

Koz noted that the Summer Horns concept started in 2013 as a side project, but “it was met with tremendous enthusiasm. It’s in the DNA of our group—Blood, Sweat and Tears, Tower of Power. It’s that late 60s to late 70s music that I grew up loving and try to emulate in my own music.”

“I’m looking forward to seeing people’s faces,” added Koz. “I did five live stream concerts without the benefit of seeing people’s faces. That part I can’t wait for. There’s something about the healing power of live music, which has not been part of our lives for many months. Something happens when you go to a live show. You see everyone, young and old, black and white, Republican, Democrat. At a concert, the band starts playing and it brings people together. That’s the healing power of music.”

For more information on Dave Koz and his tour, visit www.davekoz.com.

To purchase tickets for the Hyatt Regency concert, visit https://series.hyattconcerts.com.