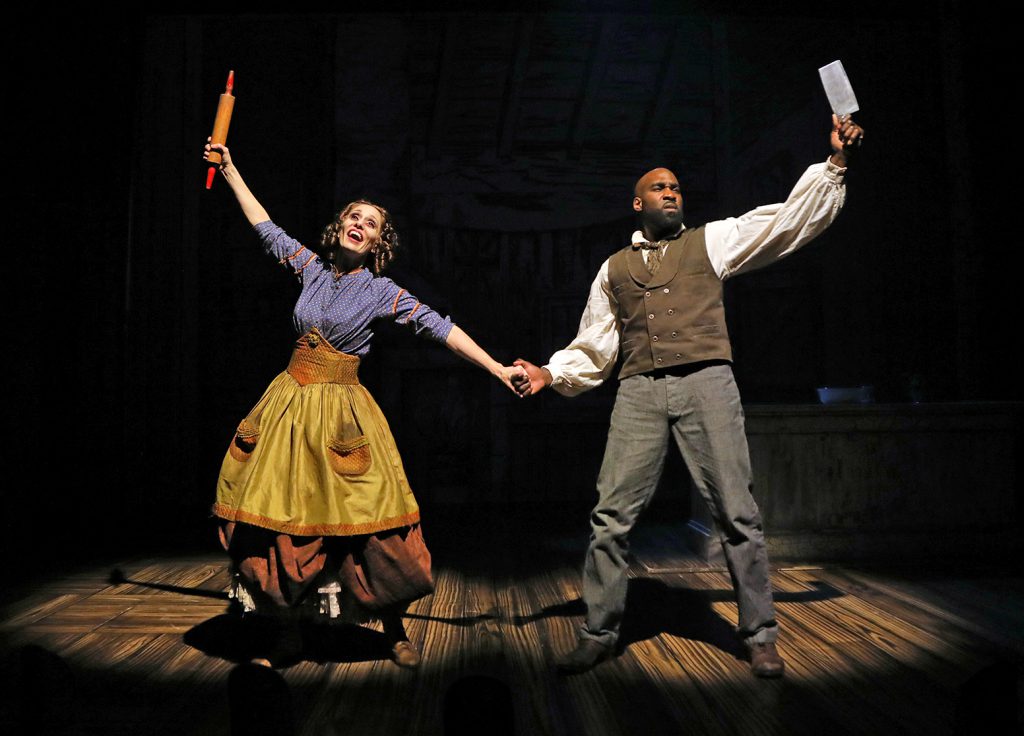 “Attend the tale of Sweeney Todd / His skin was pale and his eye was odd / He shaved the faces of gentlemen / Who never thereafter were heard of again / He trod a path that few have trod / Did Sweeney Todd / The Demon Barber of Fleet Street.” 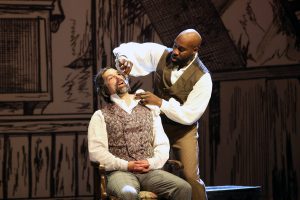 Hard to believe “Sweeney Todd” opened on Broadway in 1979, as it still feels fun and fresh, and deliciously dark. It won the Tony Award for Best Musical, and has enjoyed a lively theatrical life.

For those unfamiliar with “Sweeney Todd,” which Sondheim dubbed a “musical thriller,” the story follows Sweeney Todd as he settles into a barber shop above Mrs. Lovett’s struggling pie shop, and plots revenge on the lecherous judge who wronged Todd and his family. The barber’s strange alliance with the pie-maker seems to provide the perfect solution to their problems. 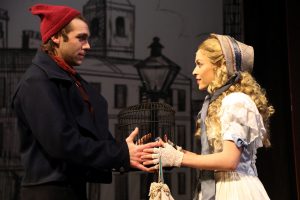 According to “Sweeney Todd” director Kent Nicholson, the themes in “Sweeney Todd,” including power, abuse of power, revenge and responsibility, continue to resonate with modern audiences. For the look and feel of SCR’s production, Nicholson found inspiration in several 19th-century elements including Victorian-era theatrical techniques.

“In that spirit, we’re approaching Sweeney Todd as being told by a troupe of 19th-century itinerant actors and we’re weaving some magic into it,” he said. He also is drawing out more of the comedic elements from Sondheim’s script.

“What happened then—well, that’s the play / And he wouldn’t want us to give it away / Not Sweeney.” 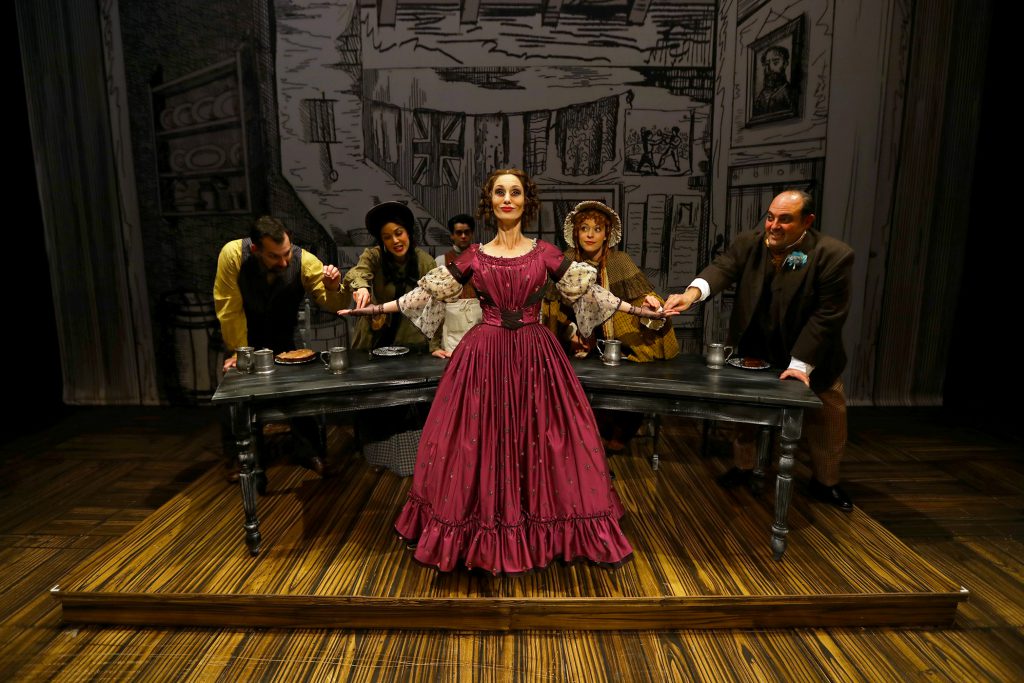 Like “A Funny Thing Happened on the Way to the Forum” in which the opening song advised the audience that they were about to see “a comedy tonight,” the opening number in “Sweeney Todd” paints a darker picture of what is about to unfold. The Victorian-era stage lights remind us we’re watching a play set decades ago.

Sondheim’s lyrics are as clever as ever, and the music runs the gamut from melancholy to murderous. Revealing too much of the plot takes away some of the surprise for those not yet a member of the “Sweeney” club, but the book by Hugh Wheeler has plenty of twists and turns and surprises. 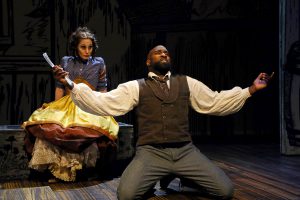 The cast of “Sweeney Todd,” led by David St. Louis in the title role, all have superb voices, which helps accentuate Sondheim’s songs, particularly the lovely “Johanna” and “Pretty Women.” Occasionally the lyrics get buried in the musical mix, but that’s part of the challenge of needing to sometimes over-enunciate the lyrics to make them mesh with the music.

Overall, “Sweeney Todd” is another fine musical production from SCR, and is not to be missed.

Prior to seeing “Sweeney Todd” last Saturday night, my friend Della Lisi and I dined at Antonello Restaurant near South Coast Plaza and down the street from SCR. 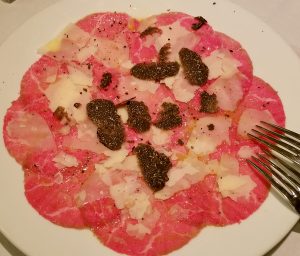 As expected, the dinner was as impressive as the play. Antonello is featuring a special black truffle menu, so we began our meal with beef carpaccio with shaved black truffles, followed by a sea bass special for Della and the signature Ravioli di Mamma Pina for me—homemade miniature ravioli filled with braised beef served in bolognese sauce. We shared the Torta della Nonna for dessert—Italian sponge cake soaked with Grand Marnier, layered with mascarpone and espresso mousse. 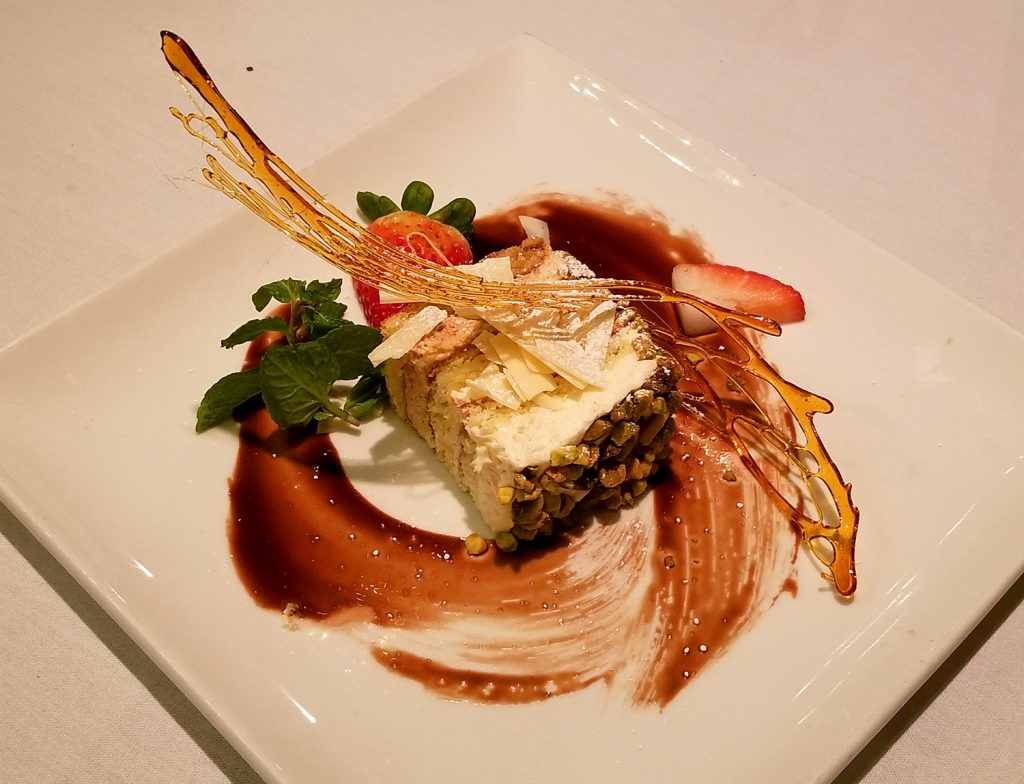