Where are you watching the big game this Sunday?

One suggestion is the Stag Bar near the Newport Pier, where all of their big screen TVs will be tuned to the game with full surround sound.

Stag Bar is an official Rams bar, and former Rams players and cheerleaders will be at Stag Bar to enjoy the event.

Specials include $.75 wings, beer deals, and $7 Cazadores shots. And of course, you can order the Stag’s meatballs and pizzas.

For those who don’t know, The Stag Bar and Hotel first opened its doors in 1908 following the completion of the historic two story building it has called home for over a century. One of the oldest continually operating bars in southern California,

Stag Bar was completely renovated several years ago when it added an expanded kitchen.

Another Super Bowl restaurant is Bayside Restaurant on Bayside Drive near Balboa Island. The TVs in the bar and lounge will be turned on and tuned in, and Chef Paul Gstrein is offering up some fun specials based on the food hailing from each team’s city.

There will also be draft beer specials, and of course the lounge menu is available.

By the way, beginning February 4, Bayside will no longer be open for weekday lunch service, although the Sunday brunch will still be offered. New hours are 4 p.m. to close Monday through Saturday, and 11 a.m. to close on Sundays. 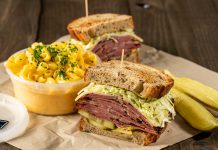