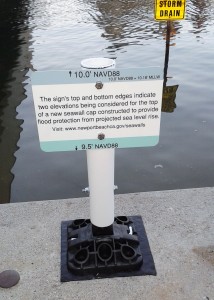 As you walk around Big and Little Balboa Islands, you can’t miss the 25 small blue and white signs that suddenly appeared last month atop the decades-old seawalls.

A 2012 study by United States Geological Survey projected that sea levels along the California coast will rise as much as one foot in just 20 years, two feet by 2050, and five and a half feet by 2100.

Both climate change and a sinking of the landmass of much of California will dictate the Golden State’s new reality.

In 2010, after a three-year-long study on sea level rise, the city concluded that Big and Little Balboa Islands would need protection from a rising Pacific.

The preamble to a September, 2014, report titled “Balboa Island Seawalls Replacement Project” states that the city is “planning for the replacement of the aging seawalls…to maintain the structural integrity of the seawall system and protect the Islands from flooding due to storm surges and high tide conditions.”

sea ice. As this continues, vast sections of coastal lands such as in Bangladesh, low-lying Pacific islands, Holland, New Orleans, Venice, London, and our Balboa Islands will likely drown under an irreversible briny flood.

What scientists cannot agree upon is how much of a rise there will be, though computer models project a range between 18 inches and 66 inches by 2100. The expected value is 36 inches.

Newport Harbor is but a microcosmic representative of the 23 percent of the world’s population living near coastal zones that perhaps will be cataclysmically affected by sea rise.

Residents can expect coastal flooding, storm damage, eroding shorelines, saltwater contamination to freshwater supplies and more. And that’s not including the threats to wildlife habitats, fisheries, beaches, estuaries and lifestyle.

However, as the seawaters creep up imperceptibly for the foreseeable future, so doubtlessly will waterfront property values – as long as well-planned and constructed seawalls hold back the inevitable.

Seawalls around Balboa vary in height from between 7.9 feet and 9.3 feet at Mean Lower Low Water (which is the average of all the lowest of the low tidal measurements). Up the Bay, Lido Isle rests 5-7 feet higher than Balboa, so the near-term potential for flooding is less. For comparison, the average sea wall height around Southern California is between 9 and 9.5 feet.

However, all of this is for “short term” preparation. Multiple studies project a 12 to 13 foot sea rise by 2300.

The report further said that the existing seawalls “have performed well in protecting the islands from flooding, but are now showing their age.” The walls are estimated to have between 10 and 25 years remaining of useful life.

According to the seawalls replacement project report, the seawalls around the Islands are high enough to provide adequate flood protection, although some walls are not quite high enough should Newport experience a combination of high tides and waves (which occurred during winter storms in 2010).

Should there be further rise in sea level, longer segments of the existing sea wall around Balboa Island could be subjected to overtopping. South facing sides of both islands can be more susceptible to periodic overtopping from wave run-up through the harbor jetty entrance.

The report notes that new seawall construction probably would not begin for at least three years; seawall construction would likely be performed in two phases over a five-year period. Seawalls of most concern, the Grand Canal and the west end of Balboa Island, would be in the first phase.

The second phase would likely be the south sides of the islands, as they are more susceptible to storm waves.

Proper drainage has been addressed in the plans for both public and private property.

The full report is available on the city’s website. Go to newportbeachca. gov, then click on “Current Projects and Issues.”

Their charge is to establish long-term goals for the city’s tidelands, such as creating a capital improvement plan for the area. Seawalls come under that category.

Citizen Advisor Dastur is a Balboa resident with obvious interest in island survival. He also is a retired marine construction engineer who has headed major bridge, dam and harbor projects around the world.

Among his smaller but no less important assignments was overseeing the 1999 seismic retrofit of the Balboa Island Bridge.

A new consideration, that the wall be repaired rather than replaced for a fraction of the cost and for a period of 25 years, was presented at the last committee meeting Sept. 17. Dastur believes this to be worthy of further discussion. He feels that for that quarter century timeframe, the seawall need only be elevated to nine feet.

“This option will give us the time necessary for a solution to the 2100 eventuality, which will have to be faced by the entire harbor, not just Balboa Island,” Dastur said. “It will also give us a better handle on the trajectory of the projected rise in sea levels, as well as technological solutions being considered worldwide.”

Committee member Jack Keating applauds the city “for trying to find a solution, although I feel that they are pushing the idea of raising the seawalls to 10 feet a little too hard.

“I’m sure there are other ways of addressing the issue,” Keating continued, “perhaps by increasing wall height by small amounts initially, then increasing it as necessary if global warming continues. The city is flexible and is looking at what is the right thing to do.”

Keating added that with a little bit more time, we should pay attention to what other cities around the world are doing.

Residents of the islands have their thoughts. Grand Canal homeowner Bob Pack said, “Raising the seawall will change the relationships, the intimacy and connectivity we have to the water.”

He emphasized that he was speaking from “an aesthetics point of view,” and that he still has more to learn about the all the seawall options before commenting on what action might be taken.

Little Balboa resident David Nealey said, “I think it’s a great thing that the city is addressing sea rise well in advance of the problem.” He added that any wall height change will have a “visual impact; I like the way it looks now.”

“Sunny” Larson has lived on the Little Island for 50 years. “I don’t like the idea of raising the walls, but if the ocean is going to rise…” She pondered for a couple of seconds to dwell on that eventuality. “What’s that going to be like for little kids who like to walk on the walls?” Sunny asked.

There’s little scientific doubt that a serious sea rise will occur during the next 85 years. For those who think that’s an eternity, just ask any senior citizen how fast that comes around.