The lights dim with the neon backdrop of the carnival. Screams and shouts cut the air as patrons are tossed halfway to the Orange County sunset on sky-scraper thrill rides.

The sweet sugar smell of candy floss and Dole-whip swirls around in the cool, California breeze.

It’s the Orange County Fair, and tonight two 80s tribute bands are determined to bring the decade back to life in the Hangar.

Much like the fun house next door, tribute bands are a bit like looking into a curved mirror. It’s not exactly what you’re expecting given the familiarity of the tunes, but the differences sometimes make it all the more fun.

Sitting next to my newly won giant stuffed leopard, I watch other festivalgoers filter in with stuffed prizes of various sizes. 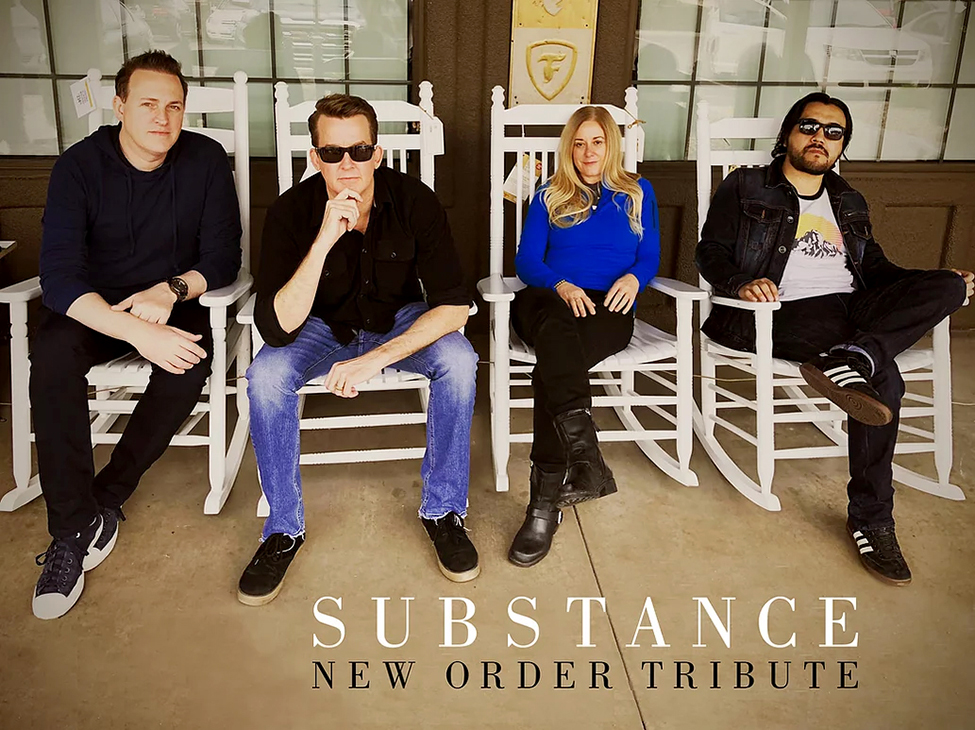 The first band, Substance, is a New Order tribute band. New Order came about after the collapse of Joy Division—a tragic story about frontman Ian Curtis who left behind a few significant, inimitable songs before passing away at age 23.

Regrouping under a new name, the Manchester-based band soldiered on without Curtis, becoming one of the most influential bands of the 1980s. Joy Division had been known for its sparse sound, a pioneer of new wave, and New Order took it a step further to mix post-punk with dance and electronic music. I was shocked to see so many New Order fans in Orange County, many wearing New Order and Joy Division T-shirts.

Substance sauntered on with the cool nonchalance expected from New Order.

“You ready to dance?” they asked, fiddling with the sound system. The group launched into “One of These Days,” and I was immediately nervous. The group hadn’t quite found their groove yet, checking the wires on the complex sound system.

I thought to myself, “New Order is a very niche band. Their nuances may be too particular to replicate.”

However, to my surprise, after adjusting to the sound, the band found their footing and took off. My fears were completely unfounded. Maybe Substance was momentarily shaken by the sheer number of bodies stuffed into the Hanger, extending beyond to the silhouette of the roller coasters. Maybe they were unsure the sound system was where it needed to be. Either way, the rest of the show was incredible. The group was affable, and it was clear they were here to celebrate the music. Substance was engaging, good-natured, and they gave the music the limelight.

For their next song, fan-favorite “Age of Consent,” OC native and founder/frontman Jeff Johnson brought his son, Jacob, out to play guitar.

It’s a statement said light-heartedly but with all the truth the audience knows. We’re here to keep this music alive—40 years down the road already, and hopefully for the rest of time itself.

As the beat kicked in the tempo stuttered its signature sound, and the audience started to dance to the well-loved hit. I’m struck with the hope that New Order’s music never fades. It’s in that special remoteness that makes you feel you’re privy to a secret that’s only known by the best. And right now, it’s known to the OC Fair.

There’s nothing more tender than seeing a father and his teenage son rocking out to New Order together. Jacob takes the solo, then lets it rip. He does a great job, locking eyes with his father as they scale the notes and shred their strings. Maybe I start to tear up at how genuine their enjoyment is, or maybe it’s the festering guilt of the giant caramel, cream-cheese covered cinnamon roll I ate. Who knows, who cares, but I do know that Jacob is probably the coolest kid in his class right now.

Behind the seats, people dance with their bags of kettle corn flying around. The audience sings “True Faith” back to the band. A couple of devotees dance in the aisle. Seeing the band smile and get into it even more as the audience reacts reminds me of why we have cover bands in the first place: to give people a time they might have otherwise missed and a chance to live it out.

By the time the group gets to “Bizarre Love Triangle,” even the security guards are banging their heads to the beat. Men with fanny packs slung over their chests discreetly rock out.

Johnson comes into the audience to find somebody to help him sing. He slides into my row to serenade a girl wearing a pink birthday crown. The audience members get to live out their wildest fantasy, although later, I’m not sure everybody actually knew they were a cover band. A guy further down in my row shouts into his phone after the set: “The dude from New Order was right next to me. I sang into his microphone; it was on the screen and everything!”

“This is our last one, then we’re off to Kuai,” Johnson says as their set draws to a close. “Take me with you!” an audience member bellows back. Laughter erupts as the band launches into “Blue Monday,” with the stage lights following in their hue.

Fans of New Order—be inspired and invent something new. Be experimental and don’t be afraid. New Order taught us that anything can be cool with the right amount of nonchalance, and that genius can follow tragedy. So go out and discover a new way to play the synth or another instrument. I know Jacob probably will. 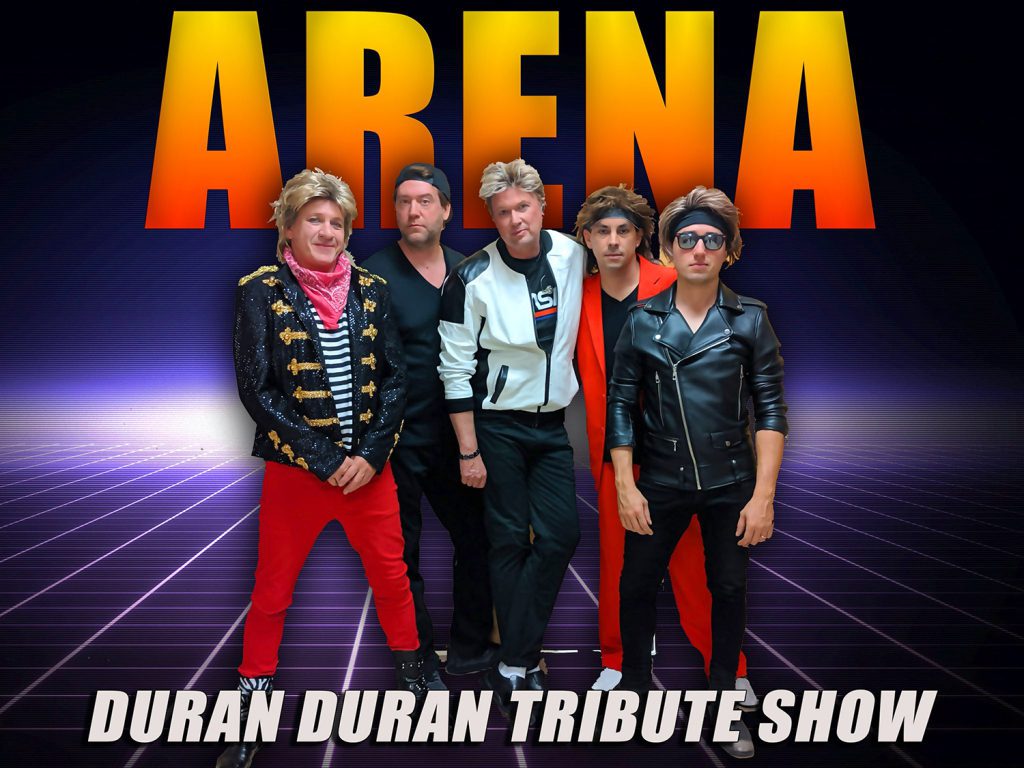 Arena, the Duran Duran tribute, wasted no time jumping out of the wings and onto the stage. The frontman, donning sunglasses inside at night and gliding around the stage, meant business. His black and white satin bomber jacket shone under the lights, and mullets suddenly appeared everywhere.

The bassist in a red blazer rocked a sweatband on his forehead, while the guitarist made a statement clad in head-to-toe leather, black Wayfarers, and a glittering pink guitar. The keyboardist and drummer matched in stripped French shirts.

The lights turned pink as the smooth vocalist dove right in. The group had a great time with the show. I was shocked that the New Order fans knew all the Duran Duran songs. While they shared the same decade, the groups were wildly different.

“OC–is anybody hungry?” the band asked before they launched into “Hungry Like the Wolf.” I was amazed the guitarist could move so well in that much leather. The stage lights bounced of the gleaming glitter guitar, adding to the maximalism effects of the decade.

When “Ordinary World” came on, the slow handwave and phone flashlights came out. Arena’s ease with their instruments and their fun playing their parts made this group entertaining for everyone. I don’t think they’ll ever be another Duran Duran, but Arena captured the wilder side of the 80s, literally. During “Wild Boys,” fans actually tried to run onto the stage, before security guards blocked their way. Luckily, the enthusiastic audience got an encore.

For “Girls on Film,” I couldn’t help but wonder: why does one band have so many hits? Who allowed this? What’s the science behind it? Either way, Arena knew we aren’t just celebrating the music. At times, we are the music—screaming it, singing it, strumming it, and bringing the 80s back to life.

For a complete lineup of upcoming Hanger concerts at the OC Fair, visit https://ocfair.com/oc-fair/entertainment/the-hangar.