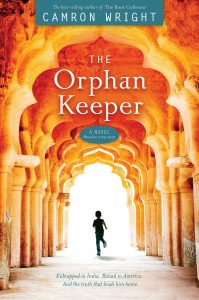 Sometimes, as a writer, you come across a story so compelling and so remarkable, that telling it becomes almost a duty.

Such is the case of the recently released book, and Under Cover Book Club selection for March, “The Orphan Keeper,” by Camron Wright.

Wright is no stranger to Under Cover, as his earlier novel, “The Rent Collector,” pulled at our collective heartstrings as a previous selection. Now, he’s back, with what promises to be another unforgettable novel, except this time, while the book is classified as fiction, the truth is that it isn’t really.

While attending a basketball game with a friend and fellow author, talk turned to upcoming projects, and Wright was told the story of Taj Rowland. He knew immediately that this was a story he must tell, and set out to learn as much about Taj’s journey as he could.

Taj, adopted at a young age by a family in Utah, was actually born in India with a different name – Chellamuthu. At around the age of 7, Chellamuthu was kidnapped and sold to an orphanage, eventually to be adopted by an unsuspecting American couple who knew nothing of the circumstances that brought their son to them.

It was some time before Chellamuthu, now known as Taj, possessed enough English, and likely, enough courage, to tell his new parents that he actually had another family, back home in India. Horrified, his adoptive parents pledged to do whatever they could to find his birth family, but it seemed that every road led to a dead end. In a country with a population of roughly a billion people, finding a family living in a small town in what can only be classified as primitive conditions, while being guided primarily by the memories of a young boy, was like finding the proverbial needle in a haystack. So, they loved him, raised him as their own, and gave him the best life they could.

“The Orphan Keeper” is the story of Taj’s journey, in both a temporal and emotional sense, to discover who he is, and, not only where home is, but what the word actually means.

So why, you might ask, is this considered a novel, and not a work of non-fiction? Wright says, “It needs to be called a novel and not nonfiction because while Taj knows the basic circumstances of his kidnapping, he doesn’t know if they lured him in or if they grabbed him. Certain details about his past, conversations he didn’t know, we had to fill in to complete the story, and that is the fiction.”

In an interview with Writer’s Bone, he expanded on this idea: “As a fiction writer, I weigh reader interest more heavily than I do exactness. That said, I felt oddly compelled with ‘The Orphan Keeper’ to remain as true to the actual story as possible. Certainly, there were cracks that needed to be puttied, but generally, it’s a story that took very little sprucing. Taj’s journey is astounding and could easily have been written as non-fiction…many of my changes related (only) to timing.”

Tweaking or not, it is a story wrought with emotion from all angles – a mother grieving the son who vanished, seemingly into the wind, another mother, never quite able to claim her son, as she raises him, while always on the hunt for the original mother, and a boy, young man, and man finding his place in the world amidst so many heavy questions.

The Deseret News says, “While the story is Taj’s, Wright’s descriptive language and ability to inhabit real-life characters so they come across the page to inspire emotion is truly a talent. His words are a vehicle of hope; his message, an uplifting one.”

I don’t know about you, but in our current climate of both tension and contention, I think that finding hope amidst tragedy is something we could all use a large dose of.

Edie Crabtree can be reached at [email protected]