Editor’s Note: NB Indy writer Richard Simon has a lot of time on his hands (as do we all) and has been filling that time surfing…the internet.

During this period of Coronavirus-induced and government-mandated home isolation, this is the perfect time to truly appreciate the brilliance and scope of the World Wide Web, aka the Internet.

There is no faster way to embrace almost all that was ever known, and to find out all that you’ve ever wanted to know; albeit, perhaps, superficially.

So many must-know bits of useless information have crossed my mind this past month. For instance, who invented the internet? It emphatically was not Al Gore, although his name is linked to that. Credit is given to Britisher Tim Berners-Lee in 1990.

Questions free flow through my now increasing curious mind. Here are a few:

What was the world’s most famous shipwreck? The Titanic, although today many are starting to say Donald Trump—but I digress.

Speaking of cruising, before this current global pandemic, how many cruise ship passengers were projected to ply the seven seas? More than 32 million in 2020. But that pales in comparison to 2019’s 4.6 billion airline passengers on nearly 40 million flights.

Not surprisingly, the most populous country in the world is China, with 1, 402, 227,000 citizens, whose numbers as you read this are already outdated, because at least 14.6 million babies will be born in 2020.

Of the 196 countries listed in the world, the least populated is Pitcairn Island in Mid- Pacific Ocean, with 50 residents. They don’t even list a birthrate, but that may change slightly if New Zealand’s efforts to entice new residents succeed. 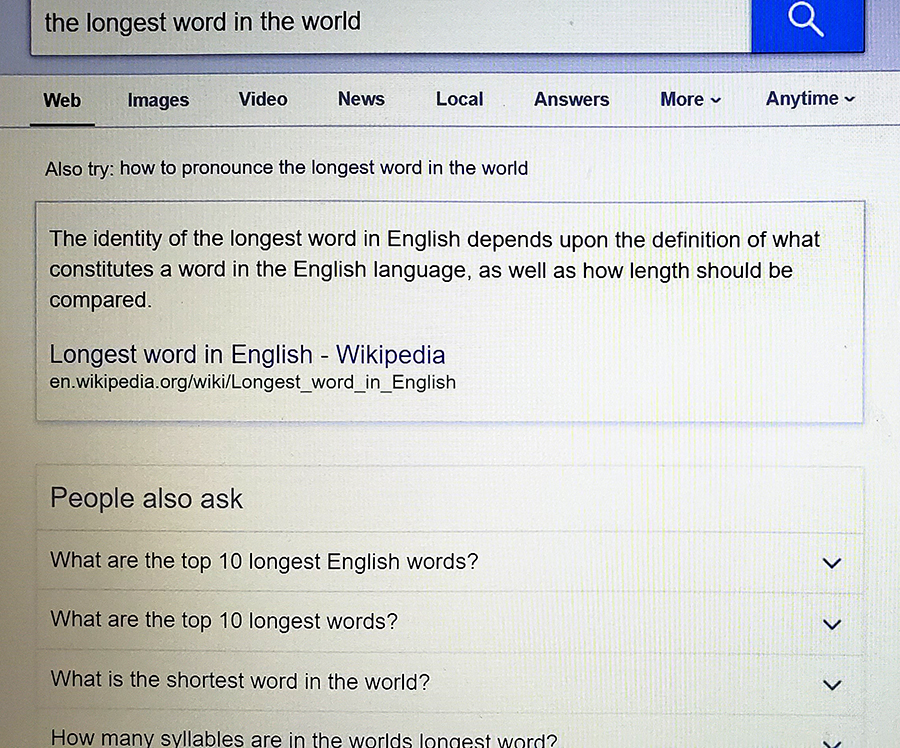 Like reading? Like words? The longest word in the world is measured at 189,819 letters—it’s the chemical name for titan (also known as connectin), a human protein. The lengthiest non-coined word in a major dictionary, according to Miriam-Webster.com, is Pseudopseudohypoparathyroidism. By the time you learn how to pronounce it, your doctor has probably cured it.

The most popular website is not a website. It’s 200,000 of them, and that’s the naked truth. Yes, porno-themed sites. I’ll take a break soon to research the truth of that number.

They say that “beauty is skin deep, while ugly goes all the way to the bone.”  True, inarguable ugly goes very deep—to the bottom of the Pacific Ocean. Check out the picture of a Hatchet fish, if for nothing else to compare to an ex-spouse.

Here are a few other random facts checked on random thoughts:

The first wars were thought to have been fought in prehistoric city/states more than 10,000 years ago. For the same reason wars are fought today.

What is dust? For those who need to know beyond just grabbing a Swiffer, take a deep breath: dust is comprised of blowing dirt, bacteria, pollen, pollutants, molds, animal dander, decomposing insects, fibers, dryer lint, insulation, dust mites and their excrement, and mostly skin flakes that humans shed. Okay, maybe you don’t want to take that deep breath.

Some of dust’s ingredients emanate from the lawn, which grows at an average rate of between two and six inches a month. For comparison, hair grows at only one-half inch a month. If that’s so, why do hair stylists charge more than our gardeners?

My wife said she wanted something around three carats, so I went to the Von’s produce section.

Marilyn Monroe was famous for, among other attributes, singing “Diamonds are a Girl’s Best Friend.” In my neighborhood, you can replace diamonds with dogs. A number of families are walking their dogs in my neighborhood, and threateningly stopping to sniff at my grass – the dogs, not the families.

According to the American Kennel Club, the AKC recognizes 195 breeds, with an additional 79 breeds barking for recognition. That doesn’t even come close to the number of mixtures from unsupervised liaisons at the local kennel.

It’s estimated that today more knowledge is generated annually than in all previous years. Fortunately, most of that can be found on the internet.