All of this leads up to the official Sept. 9 birthday, when Fashion Island will hold a Customer Appreciation Day from 2 to 6 p.m.

Even Fashion Island’s early days were glamorous. It was dedicated during a champagne-filled charity event called the “Flight to Fashion Island.” California Lieutenant Governor Robert H. Finch, President of the Irvine Company William Mason, and Vice-President of J.W. Robinson’s Carter McDonald, toasted with 18,000 partygoers to celebrate the opening of the spacious open-air shopping center.

The first four department stores anchored at Fashion Island were J.W. Robinson’s, Penneys, Buffums, and The Broadway, which wasn’t actually open on Sept. 9, but did open for business two days later.

Only two restaurants – Bob Burns and Velvet Turtle – were open for the dedication, along with 56 stores. Fashion Island now has over 120 stores, 40 dining locations and a movie theatre complex—although Island Cinema is closing in early September to make way for a new movie theatre scheduled to debut in spring 2018.

While the buildings have been renovated and repurposed over the decades, the facade of Robinson’s (now Macy’s) remains the most recognizable from that era. In fact, the Macy’s building holds one of the few remaining landmarks from the mall’s opening year.

The bells on the exterior of Macy’s south entrance are the work of sculptor Tom Van Sant. These wind chimes were installed in 1967 and named by the Guinness Book of World Records as the largest wind chimes that year. They no longer hold that honor, but still give enormous character to the three-story department store.

The volume of the wind chimes has been reduced by bell-shaped domes that cover all of the wind chime pipes. There are over 50 domes and over 300 chimes in the bronze creation. Van Sant’s art is also featured on multiple buildings throughout Newport Beach.

Fashion Island is a major draw for visitors to Southern California. The Irvine Company, which built the center and still owns and operates it today, is the number one source of property tax revenue for the city. Its shops are undoubtedly a high source of sales tax for Newport Beach as well. 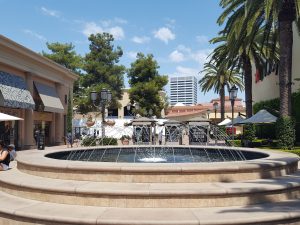 But for a shopping center that is 50 years old, it has become more than just a fancy mall. It’s a slice of history that has seen architectural and fashion styles come and go. It has been the scene of dozens of Newport Beach Film Festivals, fashion shows, backdrops for tv shows and movies, and most importantly, a venue of memories. Visits to Santa or the Easter Bunny, Christmas tree lightings, and dates both memorable and less so have taken place in the middle of Newport Center. 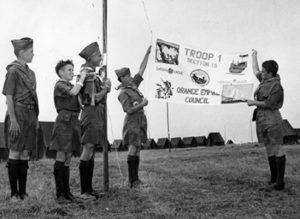