How are restaurants in Newport Beach surviving during the COVID-19 pandemic, and what can be done to help them?

That was a main topic of discussion at the Newport Beach Restaurant Association Business Improvement District annual board of directors meeting on Wednesday morning, April 22.

Association board members, a city liaison and Newport Beach & Co. staff attended the meeting from remote locations via Zoom.

Directors Jim Walker, Ron Schwartz and Matthew Meddock were absent, but a quorum was present to make the meeting official.

Before the meeting began, Doug McClain, senior VP & CMO for Newport Beach and Co., asked the board members – all of whom either own restaurants or represent one – how they were doing. The answers offered plenty of food for thought.

“We’re hanging in there,” replied Restaurant Association President Juan Carlos Godinez, GM of Tavern House Kitchen + Bar. “We recently reopened for takeout and delivery. It’s enough to pay some bills and it’s a shot in the arm. Our community has been so gracious with their ordering and giving generous tips for the staff. But it’s not sustainable for the long term, but it is fun and helpful for the short term.”

“I echo that comment,” said Phil Crowley of Modo Mio Restaurant. “Guests have been incredible, it’s the bright spot of this ordeal. We are open 3 to 8 p.m. seven days a week. It’s not a business model, not viable. We are able to keep about half of the staff working; that has been our goal.” 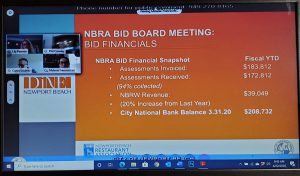 The Restaurant BID is up for its annual renewal with the city. McClain prepared a draft letter from the board president to the city council for fiscal year 2020-2021. The only difference in this letter compared to previous years, noted McClain, is that assessments are forecast to be down due to the COVID-19 situation, so in the letter he noted the Restaurant Association is asking the city for a $40,000 grant – an amount previously given to the Restaurant Association – to help offset lost assessments.

“There may be restaurant closures, or restaurants that cannot afford to pay their assessments,” said McClain. “We have forecast a 40 percent drop in assessments for next year as a worse-case scenario.”

A discussion among the board members ensued, with one noting that the assessments could be down as much as 60 to 70 percent.

“I think 25 percent of restaurants are not going to reopen,” said board member Jordan Otterbein of A Restaurant.

After the discussion, there was agreement that the letter to the city council should ask for a $75,000 grant instead of $40,000.

During a discussion of the annual report and 2929-2021 Objectives, McClain noted that a new objective has been added: Develop a COVID-19 Marketing Recovery Plan to promote Newport Beach restaurants and assist with economic and financial recovery efforts.

“We assume that will be the Restaurant Association’s primary goal, to help the restaurant community recover from this situation,” explained McClain. “We have also altered objective four: “Foster the Newport Beach culinary community to increase stakeholder engagement, which will include new safety and health communications to restaurants as a response to the COVID-19 pandemic.”

“Up to this point, this was one of the best years for the restaurant association–Restaurant week was amazing,” said McClain.

The next Restaurant Association meeting, set for May 27, will be to review the city council’s directions and also make formal board nominations.

Near the end of the meeting came a discussion of the restaurant recovery phase and what that might look like.

“We have some ideas but want to hear from you too,” said McClain. “Visit Newport Beach is also working on a recovery plan.”

Melissa Jacobi, Sr. Manager of Multimedia Marketing & Partnerships for Newport Beach & Co., told the board that “as a team we have been brainstorming what the recovery plan looks like for NBRA. We came up with a mini restaurant week, not sure when, hopefully this summer. What would that look like? Is it more like our January week or something where everyone is involved, with no discounts.” 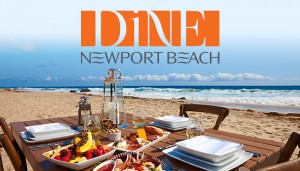 “We know the restaurants will not be able to pay a fee for a restaurant week,” added McClain. “We know you probably cannot discount, but some sort of promotion. One idea is a passport—diners dine in multiple restaurants and get stamps.”

“This may be a good way to incentivize diners to visit restaurants,” said board member Talia Shire of Outshine PR, which represents Moulin restaurant. “Maybe we can give winners VIP access to the 2021 Restaurant Week Launch Party.”

“I love the idea, something like a welcome back grand reopening,” said Godinez.

“The passport idea appeals to me,” said board member Kenyon Paar of Five Crowns. “Maybe hotels offer a facial, or massage from Fashion Island Hotel, so it’s dining and hospitality—all the great tourism things we have in Newport Beach.”

The discussion will be continued at the next Newport Beach Restaurant Association board meeting on May 27.