Bees or no bees? That is the question. “The Pollinators” may have the answer.

“The Pollinators” is one of the films in the Newport Beach Film Festival’s Environmental Film Series, presented by Pacific Sales. 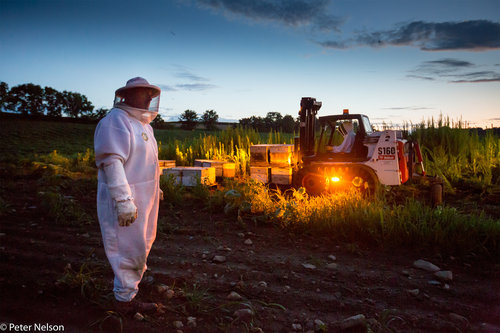 An eye-opening film is “The Pollinators,” which screens April 27 and May 1. It tells the story of how our food system is under threat and depends on honey bees and the commercial beekeepers that move them from farm to orchard, pollinating crops that native pollinators can no longer adequately accomplish due to our agricultural practices involving pesticides.

Honey bees pollinate one third of the food we eat, yet honey bee populations in this country have fallen by half since the 1940s and continue to decline.

“The film plays in the Environmental Film Series, but has also has a ‘culinary’ focus, as it takes a look at our complex food system that rests on the wings of the honey bee and the commercial beekeepers that move them around the country, pollinating the crops that produce the food we all eat,” said Feibleman. 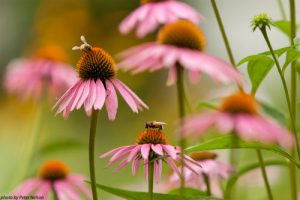 Some takeaways after watching “The Pollinators” documentary: pollinators contribute $20 billion to the U.S. economy, yet honey bees are dying at levels that are unprecedented and disconcerting. According to the film, one third to one half of bee colonies are dying every year. Pollution is rampant because of how we are producing our food. One of three bites of food we take is a result of pollination, yet the use of herbicides and pesticides have a negative effect on pollinators. American’s want and expect a perfect piece of fruit, and the film makes the case that “it takes a lot of pesticides to produce a perfect piece of fruit.”

Some farmers are embracing regenerative farming with a diversity of plants and integrating crops and livestock.

The film has impressive closeup and slow-motion shots of bees at work, along with commentary from recognized experts that explain the crisis and what can be done about it.

Other films in the series:

Filmed across the United States, Right to Harm exposes the devastating public health impact that factory farming has on many disadvantaged citizens through the gripping stories of five rural communities. An enlightening exploration that questions whether citizens are entitled to clean air and water, while examining the political issues that stand in the way of nationwide reform.

Third in a trilogy that includes Manufactured Landscapes (2006) and Watermark (2013), the film follows the research of an international body of scientists, the Anthropocene Working Group who, after nearly 10 years of research, are arguing that the evidence shows the Holocene Epoch gave way to the Anthropocene Epoch in the mid-twentieth century, as a result of profound and lasting human changes to the Earth.

When Mexican drug cartels and Chinese traffickers join forces to poach the rare totoaba fish in the Sea of Cortez, their deadly methods threaten to destroy virtually all marine life in the region, including the most elusive and endangered whale species on Earth, the vaquita porpoise. Follow a team of brilliant scientists, high-tech conservationists, investigative journalists and courageous undercover agents as well as the Mexican Navy as they put their lives on the line to save the last remaining vaquitas and bring the vicious international crime syndicate to justice.

Follow five friends on an immersive adventure through the unknown wilds of the Texas borderlands as they travel from El Paso to the Gulf of Mexico on horses, mountain bikes, and canoes. They set out to document the borderlands and explore the potential impacts of a wall on the natural environment, but as the wilderness gives way to the more populated and heavily trafficked Lower Rio Grande Valley, they come face-to-face with the human side of the immigration debate and enter uncharted emotional waters.

Chasing the Thunder / May 2

The marine conservation activist organization Sea Shepherd trailed illegal fishing vessel, The Thunder, for 16,000km maneuvering through giant ice floes and cyclone-like storms. In this epic game of cat and mouse, they clashed with opposing crews and nearly collided in what became the longest pursuit of an illegal fishing vessel in history.