In addition to the BYC hosts, teams invited are:

Also, after last year’s successful debut of a South American team, the Federacion Iberoamericana de Yachting will sponsor a new youth match race championship for that continent and the winner will be invited to the Governor’s Cup..

The winner of the Youth Match Racing Camp & Regatta to be held June 22-26 in Sheboygan, Wis., will receive an invitation, as well.

Additional information will be available on the Balboa Yacht Club website: www.balboayachtclub.com. 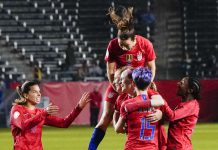