Have you ever been to a City Council meeting?  You should go.

There are different ways to communicate your point.  At City Council meetings, fear of the unknown often drives logic.  But then there are those that choose to communicate with facts and data, and that is what the youth of The Pegasus School are doing.

Tuesday morning, the 7th and 8th graders went on an Eco Math Field Trip to the Santa Ana River jetties, instead of celebrating Justin Bieber’s birthday.  Before they went, they spent some time with a subject matter expert Bill Cooper, professor and director of the Urban Water Research Center at UCI.  The young students went to talk about plastic and experimental design.

“The students want to make a difference, and see plastic in the ocean as something they can wrap their arms and minds around,” shares Cooper. “These students have a tremendous respect for the environment, are ambassadors of the planet, and can effect positive change.”

Cooper also got the Aquarium of the Pacific to videotape the entire process to complement the data for presentations.

Pam Conti, Environmental Education Director, and her math-teacher husband developed the standards by which the day’s events are measured as facts and data are gathered to provide for informed decisions.

“These kids get it,” beams Conti, who went on to describe the intent of the event.  A team of eight students has been working on a project to help prevent plastic and other debris from entering the ocean, and eventually collecting in the North Pacific Gyre, known as the “Eastern Garbage Patch.”

The data collected will be used at the Algalita Marine Research Foundation in Long Beach and will be presented to local city councils in the hopes of convincing them to install debris collection devices in the Santa Ana River, and to ban Styrofoam and maybe even plastic bags.  The students will understand that collecting data is an important component of scientific research, and will provide the basis for an environmental action plan.

“The ultimate goal is to stop the insanity,” Conti points out.

As more than 100 students broke into teams and set up their 25 data collection sites, I asked a couple what was on their green minds.

Ann Garth is a student team leader, articulate and confident.  I gave her the scenario that if she were queen for a day, or got to wave a magic wand, what would she do?

“I want people to know.  If I can get people to see this”  – she passionately points to plastic debris on the beach – “then everything can change, and people will stop throwing plastic away.”

Garth’s source of passion comes from her love of the beach, and time spent at a family cabin.

Alisa Bhata, also a member of the debate team, made her case that the collection of scientific data –  weighing and type identification of the collected debris – were important steps to reducing plastic at the beach.

Another fine student, Payton Fales, was measuring distance of his collection site when I walked up.  “We are figuring out how trash is getting here, and what we can do to stop it,” beams the poised Fales.

The Surfrider Foundation was present and flying its flags in support of the young students’ efforts.  Collecting debris at the river jetties is like shoveling sand against the tide: you can’t win.  One member, Corona del Mar High School graduate Jeff Coffman, is president of Clean Green Technology.  His company has a solution.  Its “Storm Drain Debris Extractor” safely and economically removes visual debris and chemical runoff, 24/7, from waterways discharging into rivers, lakes, channels, bays and the ocean.

This means that technology can be introduced upstream on the Santa Ana River, say in Anaheim, that would prevent trash and debris from entering the river.  The good news is that Measure M2 funds are being distributed for just such a solution.  We wish the Corona del Mar grad well in sourcing funds for this solution. 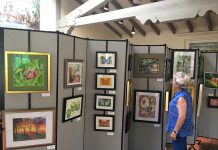