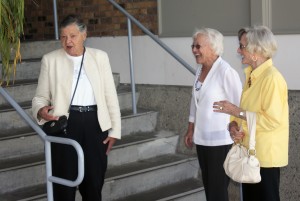 Last Friday, Jean Watt thought she was having lunch at Bahia Corinthian Yacht Club with her friends Evelyn Hart and Marian Bergeson. However, when they led her to the club’s patio, Watt was greeted by a chorus of “surprise” and a round of applause.

Watt was indeed surprised, but Rosansky said she was the perfect person to receive the honor.

“Jean has decades of activism and a laundry list of involvement in the community, from city council to SPON to the girl scouts,” said Rosansky. “It’s years of giving your time and effort to the community. I can only hope to have half as many achievements as Jean.”

Watt joins a long list of past recipients dating back to 1949, the first year the award was presented. Many recent Citizen of the Year recipients were in attendance at the 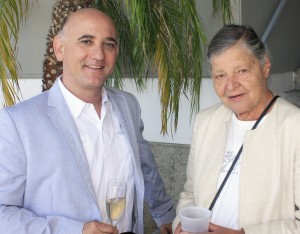 According to the Chamber of Commerce website, the Newport Beach Citizen of the Year Award is presented to “that individual who best represents the qualities each of us admire and respect among our friends, neighbors and associates. It’s not given so much for achievement, as it is for helping others achieve. It’s not given for outstanding single effort, as much as for long-term, continuing commitment to the community.”

A resident of Newport Beach for six decades, Watt is a past city council member. Her long list of accomplishments focus on environmental causes, include founding Stop Polluting Our Newport (SPON), and volunteering with Environmental Nature Center, Orange Coast River Park, and Friends of Harbors, Beaches, and Parks

A gala to honor Watt is scheduled for this October.