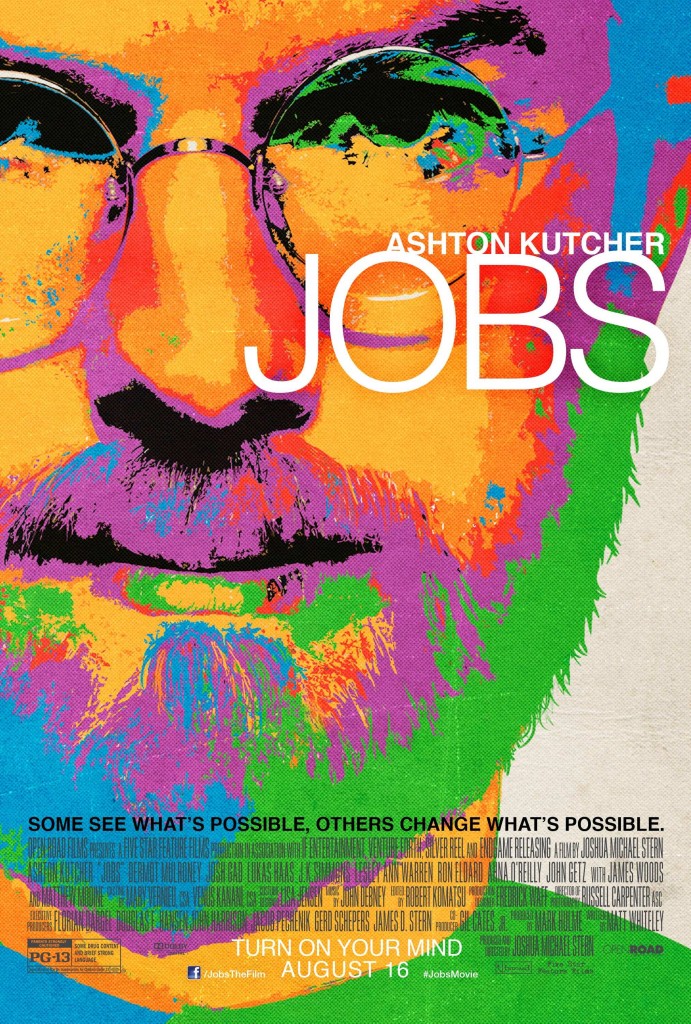 He was arrogant and obstinate, brilliant and troubled. He shunned his first child, Lisa, and denied paternity for many years. He ignored friends and betrayed their trust. But he was one of the most brilliant minds of the past century, and he changed the world of computing, design, and music like no one else.

Steve Jobs died much too early, and even with just 56 years on the planet he left a mark that many innovators can only envy.

The new bio-pic, “Jobs,” starring Ashton Kutcher in the lead role, shows Steve Jobs, warts and all. Starting with an opening scene from 2001 when Steve unveils the very first Ipod to his Apple team, and flashbacking to 1974 with Jobs as an arrogant college student, we see sparks of brilliance and restlessness as he had visions that many misunderstood.

Teaming with Steve Wozniak, played by Josh Gad, with all the heft and awkward nerdiness that was probably more accurate than not, the movie shows their first meeting with their first financial backer, Mike Markkula, starring Dermot Mulroney with the best of fashions and hairstyles from 1976.

Working from his parent’s now historic garage, Steve pushed the envelope from day one, making promises that were unrealistic, but usually accomplished.

As a fan of Ashton Kutcher, I always felt he had more acting chops that his silly romance comedies and mostly mindless movie history have revealed. Here, he gets a chance to push himself a bit further, showing Job’s violent temper tantrums, his unforgiving betrayal of his girlfriend and expelling her from their house when she says she is pregnant, to his iconic walk down the hallways of Apple, Inc.

Time mellows us, and the movie shows that when he came back to Apple—actually forced himself back in—in 1996, it was to be on his terms, but tempered with more patience and focus than during his more volatile younger years.

The last scene shows Kutcher narrating final closing words that end cap the journey of his life. Had the movie played out the early part of the 21st Century, we would see even more of his brilliance as Jobs redefined digital music and licensing–yet another legacy.

Is the movie worth seeing? It’s not perfect, but for fans of Steve Jobs or Apple, or seeing brilliance and entrepreneurial pluck in action, it’s worth the two hours run time, especially if viewed from the comfortable ambiance of the Port Theater in Corona del Mar.

The Port is quickly spoiling me and causing me to shun other theaters. Not only do they offer an amazing menu of food, including pizza and Port hot dogs, but you can enjoy your favorite beers, wine, champagne or other libation in the privacy of a living room probably larger than anything you’ll ever own.

If you think a 72 inch viewing screen is something to be envied, you’ll like this 35 foot-wide version. Sitting in ridiculously comfortable chairs I opted for the sofa this time, which allowed an unlimited variety of sitting, leaning, reclining or even lying down positions if you choose.

Since the theater holds just over 160 seats, they do sell out so getting advance tickets is recommended. As we continue to review movies here, we will add bits and pieces about the theater and some plans for the future.

And here’s something to think about: Did you know you can book the theater for your own private holiday party? Many theaters offer options like this, but few can offer this degree of comfort, refreshments, and personalized food and atmosphere.