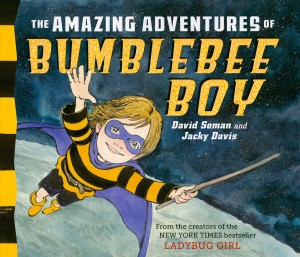 Faster than a food court lunch, more powerful than a shot of espresso, and able to leap Whole Foods in a single bound – super heroes are headed to Fashion Island, and your little caped crusader is invited to join in the fun!

On Saturday, August 31, at 11:00 a.m., Barnes and Noble will host “Superhero Saturday.” Anyone with x-ray vision, super strength, or invisibility powers (real or imagined) is welcome, so long as they promise to thwart the evil villains and save humanity outside in the parking lot, thereby sparing the bookstore from being reduced to rubble.

Don’t leave your cape at home however. Little heroes are encouraged to attend in costume, and will be able to partake in stories, crafts, and all-around superhero style fun – and even enjoy a treat to help keep their super powers going strong.

Super Mom and her sidekick Ultra Dad are, of course, encouraged to attend alongside their diminutive defenders of justice.

If you’d like to brush up on some “super” reading prior to attending, please check out the following titles for young readers.

–“Superhero ABC” by Bob McLeod – in this humorous review of the alphabet, readers are introduced to a slew of alliterative superheroes such as Danger Man, who does Daring Deeds every Day, and Upside Down Man, who wears his Uniform Under his Underwear.

–“The Amazing Adventures of Bumblebee Boy” by Jacky Davis teaches kids about sharing, and that sometimes, two heroes are better than one. When he is Bumblebee Boy, Sam likes to fly solo, excluding his younger brother Owen, who doesn’t have a cape or mask. When the aliens are too numerous for Sam to defeat alone, however, he learns the power of teamwork.

–“Super Hero” by E.C. Graham reinforces that a kind heart makes a hero. Davey Davenport, inspired by a teacher who reminds him that it is what is in one’s heart that makes 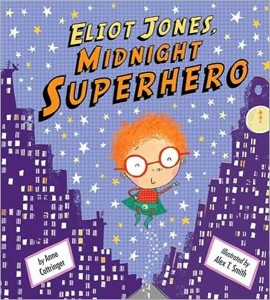 a superhero “super,” decides to defend the less popular kids, even though his friends might make fun of him. He discovers that being a good friend is the best super power of all.

–“Eliot Jones, Midnight Superhero” by Anne Cottringer – in this classic tale of an alter-ego, mild mannered Eliot Jones becomes a daring superhero at the stroke of midnight, after the adults have gone to bed. As it turns out, quiet, bespectacled Eliot has quite a knack for saving the world.

–“Captain Nobody” by Dean Pitchford  — after Newt’s older brother Chris suffers a football injury, and falls into a coma, he adopts the persona of Captain Nobody. Assuming the role of a hero, he sets about saving the town by foiling robberies and such, but will he be able to rescue the one person who matters the most?

–“N.E.R.D.S.” by Michael Buckley – in this series, we meet the members of the National Espionage, Rescue, and Defense Society – a group of unpopular fifth-graders who run a spy network from inside their school.  These super-spies use science to transform their nerdy tendencies into incredible abilities.  Using their powers for good, they save the world by foiling the evil plans of all the dastardly villains that cross their paths.

Let your own little guardian read a book, and then cape up and fly on over to Fashion Island for what promises to be a Boom! Pow! Thwack! good time.