Supporters of a Newport Beach-based nonprofit named after one of the city’s most famous former residents, John Wayne Cancer Foundation, will head to the Rocky Mountain state this weekend to show their “grit” and raise funds for the organization.

Runners and hikers will trek across stunning natural landscapes that were once where Wayne filmed some of his iconic movies during the first-ever John Wayne Grit Series 10K in Ridgway, Colo. on Saturday.

“Are you tough enough to hit the trails and help in the fight against cancer? We know you are — and that’s why we want you to show us your true grit by participating in the (race),” officials wrote in a press release.

As part of the 50th anniversary celebration of one of the Duke’s best-known films, “True Grit,” the trail will go by the ranch where the movie was filmed.

“This epic new trail race event gives you access to the some of the best and most beautiful trails in Colorado — winding along Last Dollar Road,” officials wrote in the statement.

With the steep forested San Juan mountains as a backdrop, participants will pass alongside rustic ranches on lush hillsides, view the spectacular fall changing trees, rushing rivers, and wildlife, officials wrote in the announcement.

The True Grit 10k takes place during a weekend full of events to celebrate the anniversary of the film with a 3-day festival, Ridgway Old West Fest, organized by the Ridgeway Western Heritage Society including scenic tours, concerts, celebrity attendance and more.

The series also included a half marathon on Oct. 5 in Alabama Hills, where “How the West Was Won” was filmed.

Foundation Director Ethan Wayne said they are “thrilled” about the series.

“Both the Alabama Hills and Ridgway are not only where my father filmed some of his timeless movies, but are destinations for anyone who loves the great outdoors,” he said in a prepared statement. “With the help of the generous supporters that join us we will be able to make a big impact.”

The Foundation’s mission is to bring courage, strength and grit to the fight against cancer, officials explained in the press release.

All fundraising efforts will support JWCF initiatives, including pioneering cancer research programs such as the world-renowned Fellowship Oncology Program at the John Wayne Cancer Institute, aid the work of the John Wayne Alumni Fellows, and contribute to Block the Blaze, a premier program that educates youth about sun safety and skin cancer prevention.

“Whether you’re in it to win it, to set a new (personal record) or just to enjoy a stunning hike in the shadow of the San Juan Mountains,” the statement reads, “every stride and step you take will help fund cancer research and life-saving programs through the John Wayne Cancer Foundation.” 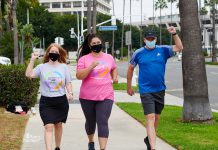