“A ball can change your life,” the film begins. 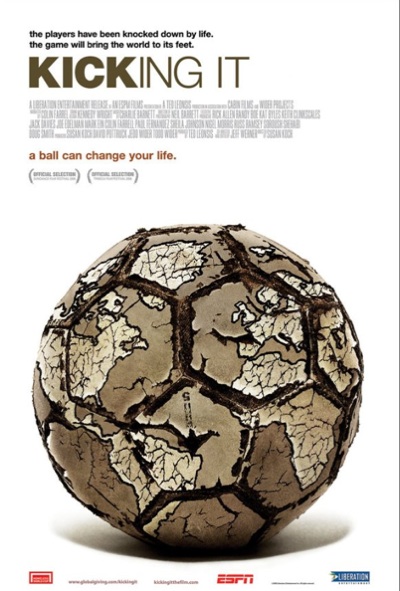 So begins “Kicking It,” the Homeless World Cup documentary by Emmy Award-winning director Susan Koch. The film shows how athletes from all over the world overcame poverty and addiction to compete in the annual international homeless World Cup of Football (Soccer), which was hosted in Cape Town, South Africa, in 2006.

There were 48 teams composed of 500 homeless people who competed, not only to win, but because competing gave them the motivation to get off drugs or alcohol, and do whatever else they needed to do to change their lives. They shared the universal goal of going from homeless to heroes.

“It was awesome,” said Newport resident Dave Terrell, “I love documentaries; I think it’s important for people to tell their story. ‘Kicking It’ shows how competing in the Homeless World Cup gives homeless people the opportunity to bring a sense of value back into their lives. I was impressed by the statistics at the end, by how improved many of their lives were as a result of the confidence built through the experience and the teamwork.”

Dave is the Creative Arts Ministry leader at ROCKHARBOR Costa Mesa campus where he collaborates with their creative community of more than 160 volunteers. He also volunteers at different soup kitchens and feels there are many approaches to helping the homeless gain skills and confidence to change their lives.

“I was interested in the movie because I know there are many creative possibilities for speaking into the lives of the homeless,” Dave continued. “I’m pursuing a ministry idea to use the arts as a way for the homeless to express their feelings, build confidence, and gain back some dignity back in their lives. I’m in conversations with OCforOC and Churches Consortium (OCforOC (One Church for Our City Costa Mesa) has different initiatives: education, crisis response, immigration and homelessness. The homelessness initiative is called the Churches Consortium) to use the arts as a way to speak into the lives of orphans, the schools and the homeless – be it visual arts, drama, dance or other creative expressions. God put that on my heart months ago and I’ve been exploring the possibilities. I live on the peninsula, with a very transient college-based community around me, and I see the opportunity to use the ministry of art in my own neighborhood.”

Dave was one of more than 40 people who gathered recently to view the film narrated by actor Colin Farrell. The documentary features homeless participants from Afghanistan, Kenya, Ireland, Spain, Russia, and the USA. It premiered in 2008 at the Sundance Film Festival and is being distributed by Liberation Entertainment, Netflix and ESPN.

Becks Heyhoe of the Churches Consortium explained that she organized the event for people to see an innovative approach to addressing homelessness.

“We had people from all walks of life, different churches, different ages, different living arrangements, and it was wonderful to be family together watching the movie!” Becks continued. “We came together to learn. We’re excited to see what God is up to! Maybe us showing the movie will lead to other cities showing it too and maybe down the line there could be different sport leagues around the county. People could volunteer as coaches or team mentors, and we could work together for solutions. We hope ongoing conversations inspire and spark other creative ideas. It’s all up to God.”

“The problem of homelessness is universal,” Becks said. “Every country has the problem; people choose to address it in different ways. There are so many different reasons as to why people find themselves experiencing homelessness, and some have the inner drive to get out of it. But there are many without hope and self-esteem, and what we are doing as the Churches Consortium is pulling people together to see what we can do through collaboration. We offer practical solutions, like our Check-in Center and referrals as well as relational components such as Bible studies, prayer ministry, opportunities to learn (like the movie), support groups, and quite simply- friendship, encouragement and support.”

For more information, go to facebook.com/churchesconsortium. Cindy can be reached at [email protected]