Imagine a holiday resort a few miles outside of Prague reserved for Czech nobility. That was the original purpose of Terezin, before Nazi Germany turned it into a Jewish ghetto and concentration camp. It held primarily Jews from Czechoslovakia, as well as thousands of Jews deported from Germany and Austria.

More than 150,000 Jews were sent there, including 15,000 children, and held there for months or years, before being sent by railroad to their deaths at Treblinka and Auschwitz extermination camps. Less than 150 children survived when Terezin was liberated at the end of World War II. 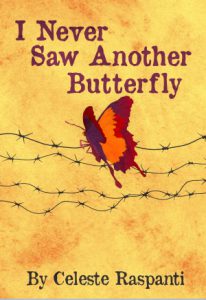 This infamous period in history is the setting for the play “I Never Saw Another Butterfly” by Celeste Raspanti, which is being produced by the Laguna Playhouse Youth Theatre Oct. 19–27.

The plot revolves around the real-life story of Raja Englanderova, one of the survivors of Terezin. Englanderova lived through the hardships while teaching the children when there was nothing to teach with, giving them hope when there was little reason for hope, and creating a little world of laughter, flowers and butterflies behind the barbed wire.

There were no butterflies at Terezin, but for the children, butterflies became a symbol of defiance, making it possible for them to live on and play happily while waiting to be transported.

Laguna Beach resident Donna Inglima, the former Laguna Playhouse director of Youth Theatre, Education and Outreach, is returning to direct the play. She initially staged the production seven years ago for the Playhouse’s Theatre for a New Generation.

Inglima directed another holocaust-themed play for the Youth Theatre two years ago, but said it was time to bring “Butterfly” back to Laguna.

The story is a timely one, in light of the all the recent anti-Semitic incidents that have been plaguing the country, including several high-profile events in Orange County, like the Nazi swastika incident involving Newport Harbor High School students.

In March, photos from an off-campus local high school party surfaced that showed Nazi symbolism during a drinking game. The photos show a group of teenagers giving the Nazi “Sieg Heil” salute while gathering around a swastika formed with red plastic cups. It was revealed that several of the students in the photo attend NHHS, as well as other local high schools.

The photos quickly went viral and picked up national attention. The vast majority of comments expressed outrage, condemned the students’ behavior and called for tough discipline. Newport Beach Mayor Diane Dixon and Mayor Pro Tem Will O’Neill released a joint statement about the incident, saying they were “appalled and saddened” by the “deeply disturbing” photos.

“Things have exploded since our last holocaust play, for any number of reasons,” Inglima said during a recent phone interview. “I can’t say it was an overtly political statement, but I knew we needed to address the anti-Semitic fervor. I think everybody does study the holocaust, and the symbolism of the Swastika. It’s a dynamic symbol. Did the (Newport) kids completely understand what it means? Not only did they make the symbol, but they were saluting it. They were uneducated by the power. They had no connection.”

Inglima wants audiences to not only make the connection by experiencing “I Never Saw Another Butterfly,” but by staying for the post-performance Talkback sessions featuring holocaust survivors.

Inglima said she helped her young actors make a connection with the holocaust by taking them to the Museum of Tolerance in Los Angeles, which Inglima described as “a very powerful experience.

“We heard from a holocaust survivor. It was a major educational moment,” she noted. “I also gave them a handout from the book, which was the inspiration for the play. I explained that everything in the play is true, so they had that understanding.”