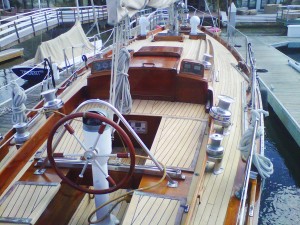 The essence of nautical beauty, tradition, nostalgia and rare craftsmanship will be on full display at the inaugural Balboa Yacht Club Wooden Boat Festival Saturday, June 7, from 10 a.m. to 4 p.m.

Forty-five of the finest classic sail, power and human-powered vessels hailing from San Francisco to San Diego will either float or show on dry land in a retrospective of the nautical history of Newport Beach.

Helping to organize the festival has been a labor of love for marketing executive Rodheim, who as a 12-year-old was taken on his first sailboat cruise aboard a Rhodes 33’ sloop named Madness.

He realized then that sailing was to be a lifelong passion. In fact, Madness left such an impression on Rodheim that he purchased 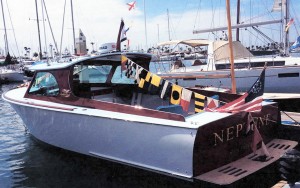 her 50 years after that debut adventure; she will be on proud and restored display at the BYC Wooden Boat Festival.

After 65 years, Madness still races. In her first two competitions this year in the American Legion Sundowner Series, Rodheim has skippered her to two first place finishes – proof that old boats made of traditional materials blended with tried-and-true racing strategies certainly can defy time, as well as the competitive clock.

One of the more famous and elegant yachts visiting the show is the 1938 Sparkman and Stephens-designed, 72-foot sloop Baruna, formerly out of San Francisco, but now berthed in Marina del Ray.

Originally a yawl, she’s as sleek as a racehorse, with a grace that belies her power, which has been proven in countless blue water regattas, including two victories in the famed Bermuda race. 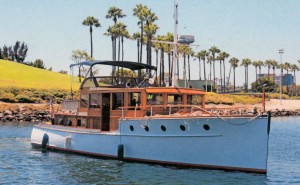 Owner/boat builder C. F. Kohler will be tacking the legendary Abeking-Rasmuessen-built, 59-foot, 55,000 pound racing sloop Sally from her San Diego base – where for the past two years he totally reframed her with steam-bent oak and replanked her in Honduras mahogany.

The Burgess-designed 10-meter racer that in the 1970s and 80s reigned queen of the Orange Coast College sailing fleet was identifiable even by landlubbers passing her berth along PCH by her green-colored hull, the hue of which was uniquely named Sally.   Today, she is white.

Last Call was on her last legs when the 24-foot Chris-Craft Holiday was discovered by her owners in an old shed, and subsequently restored to Bristol condition by a local master shipwright.

Even the correct hardware was located and re-chromed to perfection, while as much of the original wiring was used where it wouldn’t comprise safety.

Her topside and hull wood are 100 percent original, while the 158-horsepower gasoline engine — restored, of course — powers her as it did when first cranked over.

On the smaller side of show entries, there’s Rupert, a Naples-designed Sabot sailboat, measuring nine feet by four feet with a six-inch draught. She’s made of 100 percent Okume plywood – known for its kid-collision robustness. Many championship sailors got their starts in the sport as youngsters racing Sabots in the bay.

In the human-powered category, the visual poetry of Pygmy Kayak Company’s Queen Charlotte model will amaze those who are unfamiliar with its construction technique: stitch and glue.

Built by paddler Barry Mason in 1989, he named her Twilight.

When one paddles in peaceful Newport waters, the kayak slips through as quietly as a twilight descends.

Boat biographies of the 45 entrants can be found on the show’s website: bycwoodenboatfestival.com.

Attendees should navigate to the Newport Beach Country Club parking lot for a free shuttle to the Balboa Yacht Club. Return trip guaranteed.