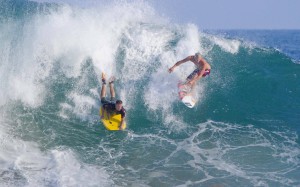 A lone rock stands hiding in plain sight to thousands of beachgoers who pass by en route to the Wedge at the entrance to Newport Harbor; they’re going to either risk their bones body surfing, or to oooh and ahhh those watermen on vertical wave faces that challenge both cervical integrity and common sense.

Bolted to that rock is a simple bronze plaque honoring the man whose name has, over the decades, become as invisible as that hunk of granite.

He is George Rogers, the impetus for construction of the West jetty, which changed Newport from the finest surfing spot on the entire American west coast in the early 1920s to the world mecca for daredevil body surfers.

But it wasn’t his love of sport that drove the entrepreneurial, wealthy and nationally connected Rogers to lobby for government funds for the massive construction project.

It was because of the 1926, heart-wrenching loss of his paralyzed son, who defied advice and steered the family Dodge Water Car speed boat into a maelstrom of waves that were slamming across the unprotected Newport Bay entrance.

A large wave capsized the boat. His son, pulled down by the weight of heavy leg braces, drowned, and was never seen again.

Thus began the slow decline of the patriarch, who died of a heart attack aboard the family yacht as it was returning to harbor — at just about the exact position where his son had been lost 10 years earlier. 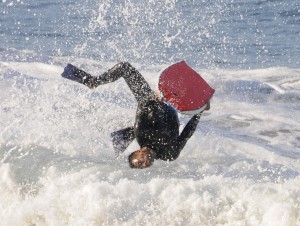 Rogers recalled that several months prior to production, he sat by that memorial rock for half an hour, and watched several hundred people walk by.

“Not a single person ever looked at the rock,” Rogers said. “I knew then I had to make sure everyone knows the story behind that rock.”

Producing the documentary has helped Rogers, a Newport Harbor High School graduate, “to stay connected to the city in which I grew up,” the history of which would be far less colorful sans his ancestors’ early influence.

Although making it clear that as he is from the poor side of the Rogers’ Newport heritage, producer Rogers presents the family story clearly and honestly, with rare (by today’s standards) objectivity, although not without compassion.

He used family sources and archived films, photos and news accounts from the history-rich Sherman Gardens and Library in Corona del Mar.

Owner of Burbank-based BRC Imagination Arts, the nation’s largest “independent producer of visitor experiences for museums and theme parks” worldwide, Rogers’ insistence of quality in film and event production subtly revealed itself during the documentary’s debut at a special screening at Sherman Gardens last week.

Before the screening, most in the audience were unaware of this aspect of city history. Long a name involved in city government, Rogers’ father, Howard, was on the city council from 1966 to 1976, at which time he died as mayor of Newport.

“The Wedge” could not have been finished had it not been for the extraordinary photo and film collection housed in the library of Sherman Gardens, Rogers said.

Most of the moving images came from a Rev. Stockton, an energetic cinematographer who apparently had been everywhere one could be with a camera in the 20s and 30s, said Library Director Paul Wormser, a trained archivist who had worked for the National Archives for 20 years and served two years as Deputy Director at the Nixon Library in Yorba Linda before joining Sherman Library one year ago.

Rogers’ production team “spent several days at our library and found everything they needed to complete their project,” Wormser said, adding that “We have a very strong collection on Newport Beach from the early 1900s.”

Sherman Library is open to the public for on-site research.

After the PBS airing of “The Wedge: Dynasty, Tragedy and Legacy,” Rogers hopes that “all those beach visitors (going to the wedge) will now stop for just a moment at that rock and realize that it now alone represents what Newport was.”