A procession and memorial service honoring two of the firefighters who died in the Arizona wildfire will be held in Costa Mesa and Newport Beach Saturday.

Grant McKee, 21, attended Newport-Mesa Unified School District schools between second to 11th grades, officials reported earlier this month. McKee attended Newport Harbor High School, among others in the district until he was 17. Robert Caldwell, 23, was his cousin.

Both had “deep ties” to the community, according to a message sent out by the Newport Beach Police Department on Wednesday. 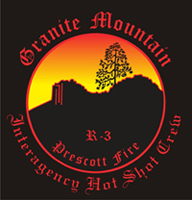 The two men were among the 19 firefighters from the Granite Mountain Interagency Hotshot Crew killed June 30 while battling the Yarnell Hill wildfire. The team was part of the Prescott Fire Department.

The procession will begin in Costa Mesa and end at St. Andrew’s Presbyterian Church in Newport Beach, where a memorial service is scheduled for 11 a.m.

“Several measures will be taken to accommodate the arrival of family and attendees for the service,” according to the police message.

Parking will be restricted in the areas surrounding the procession, according to the police message. If necessary, temporarily road closures may also occur.

Actual closures and additional parking restrictions may occur, she said. It just depends on how the day goes, she added.

The areas that may be closed or otherwise impacted might be Irvine Avenue, between 15th and 16th streets, and along 15th Street at St. Andrews Road, Manzella explained.

Both sides may not be restricted, but the street will be impacted, Manzella said.

The restrictions may be in effect from 7 a.m. until 5 p.m., although she said they do not anticipate leaving them up that late.

“We appreciate the community’s understanding and support as we facilitate the memorial of these two brave young men who died in the service of public safety,” the message reads.

May is Bicycle Safety Month: Share the Road and ‘Go Safely’

NBPD Says Check Twice for Motorcycles in May