The Newport Beach Historical Society is planning a huge, community-based effort to capture and preserve the city’s rich history for future generations.

The society is looking to assemble “an army of oral historians,” according to society president Gordy Grundy, to interview long-time residents and former residents about life in Newport in the ’60s, ’50s, ’40s and even earlier.

“We are asking for more than the usual monetary contribution,” Grundy acknowledges. “We are seeking an involvement of volunteerism that is extraordinary.”

But, he said, the payoff could be enormous.

“If we can collect Newport’s history in a significant way, our future holds a million, exciting options. Our Oral History program will become the basis of events, panel discussions and book publishing,” he said, adding, “Most of our volunteers will get published.”

The society will hold its first in-depth training session for volunteer oral historians on Saturday, May 14, beginning at 1 p.m. The four-hour course will be taught by Amanda Tewes of the Center for Oral and Public History at California State University, Fullerton.

“This is extreme volunteerism, but with a very rewarding brass ring,” Grundy said. “The human interaction is gratifying. Newporters are great people with the best stories.”

Some of these stories have already been collected and posted on the society website, www.newportbeachhistorical.com. Here is one:

Easter Week at Balboa During WWII

It seemed like Balboa and Newport beaches had the magic draw for high school kids. They came from all over Southern California to cruise Newport in their aging cars and hot rods, despite the limited gas due to rationing during the war.

It was amazing how little money it took to do Easter Week. I can remember meeting in front of Hollywood High with our club guys, The Athenians. Gene was riding in my ’32 Ford fender-less hot rod and showed up with 35 cents. Bob was in his ’34, Louie was in his ’34 Ford roadster and Ed with his ’32 five-window Ford Coupe. And nobody had much dough.

Due to our limited resources, we had to scrounge, like taking some Whittier High girls out and talking them into letting us sleep in the garage of the house they were renting on the Peninsula. When we got kicked out of the garage by the owner, we slept on the hard sand in sleeping bags.

There were a few square blocks of these little yellow bungalows, located up a few blocks from the Balboa Ferry. We slipped into one of them one night when it was raining like heck. They were in disrepair and the roof leaked water heavily down on us. Fortunately, there happened to be a box of Kotex that we managed to force into the beaverboard ceiling. By jamming the wadding into the leaks, we managed to cut down on the heavy spots and stay dry!

All we ate for every meal were glazed donuts and milk from the bakery just down the street from the Pavilion. In an effort to find some food, we parked on a short block behind the Balboa Fun Zone. The Fun Zone had fun games and rides, bumper cars, a Ferris wheel, a merry-go-round and food stands. It was crowded, jammed with kids and a lot of servicemen on liberty or leave from the War. And it was noisy. The ‘Strip Polka’ was a favorite 78-RPM record at the time, blaring loudly, with everyone singing along. “Take it off! Take it off!” yelled the boys in the back. The Skee Ball game sounds were loud, along with the music of the Merry-Go-Round that came right through the thin walls, more to add to the blaring sounds of the fun seekers everywhere.

One of the amusements was a high tower with a large bell on top. Light bulbs on each side went all the way to the top with a large bright light above the bell. The object was to hit the bell by striking a large wood and rubber hammer onto a balance beam. The thrust would send a metal weight up a groove ending at the bell. With a hard enough hit, the bell would ring at the top. If it hit, a watermelon was the reward.

Nobody was hitting the bell that cost 10 cents a try. This went on and on. As we watched, we started thinking of a way to hit the bell. The crooked guy running the game had a secret adjustment that he could allow the bell to hit or not.

In our devious plan, we got Rex, our biggest guy, as the contestant, and we pooled our money for a few hits. To insure our investment, Bob assured us that he could hit the bell with a marble, shot from a slingshot that he had acquired from one of the concessions.

Rex was a big, powerful guy and when he stepped up, the crowd cheered and gathered along the Midway. One guy yelled, “I’ll give you five bucks if you ring it,” and he held up the fiver.

Bob, with the slingshot, was off in place and Rex drew back with all his might and swung the hammer. Bob hit the bell and it clanged loudly!!!

The guy gave Rex the five bucks and the crowded yelled and cheered. The crooked guy running the game looked confused and reached down to alter the adjustment, as the crowd yelled “One more time!”

Gene held the watermelon, as Rex got ready again. He hit it harder than the first time and as it headed up, Bob was ready with the slingshot. To the surprise of the mob, the huge light above the bell blew apart into a million pieces, showering down — Bob had missed the bell and hit the light!

The game guy spotted Bob with the slingshot and went after him. Bob ran up some side steps to the roof and cut along the top of the Merry-Go-Round, but as he did, he crashed through the canvas cover, falling onto the wooden horses. Bob managed to flee from his angry pursuer and cut back to the street where I was parked, ready to roll. Bob jumped in and we sped away as the man rushed at us.

It was a good caper as Rex had the five bucks and we got a few watermelons more in the confusion. We were able to survive a few days more. 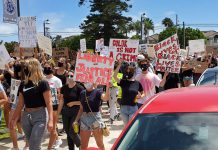