We enjoy pairing our cultural outings with our dining experiences, so when we were invited to see Moliere’s classic French comedy “Tartuffe” at South Coast Repertory, we immediately made plans to dine at Pinot Provence before the show.

After taking seats at the small bar, we ordered champagne cocktails and perused the menu. Two things in particular caught our eye: burgundy braised short ribs ($28) and the truffle mac and cheese ($8). And of course, a side of Pinot fries ($5). Christopher also ordered a glass of French wine to prepare for the French play.

“The short ribs are so tender you can slice them with your fork,” said Catherine after taking a bite. “I love that you can really taste

the sweetness of the burgundy sauce they were braised in. It gives them a nice dimension. And the potatoes are really creamy, which I love.”

“I know you’re the mac and cheese fan, but we may have to order a second helping of this because they’re really addicting,” I told her in between forkfuls of the buttery pasta dish.”

Pleasantly full and happy to have such a short walk to the theatre, we strolled to South Coast Rep with plenty of time to spare.

For those unfamiliar with “Tartuffe,” it was first performed in 1664 and follows the story of a wealthy Parisian patriarch who falls under the influence (or in this case, the spell) of a self-righteous hypocrite named Tartuffe, whom everyone else can see is a fake.

“Tartuffe is a comedy that has spanned the ages,” noted Catherine. “The humor was not lost on me even though they had that rhyming couplets phrasing that hinted at its age. My favorite character was the outspoken housekeeper, Warmanen, who brought comic relief as well as keeping the audience informed of what was really happening. I thought the play had the perfect balance of comedy amongst darker topics of religion, family and sexuality.”

For information on Pinot Provence, visit PatineGroup.com. For info on “Tartuffe,” which runs at South Coast Rep through June 8, visit SCR.org.

For more than 25 years, Chef Zov Karamardian has been creating international culinary dishes focused on Mediterranean, Middle Eastern and Armenian cuisine at her restaurants in Tustin, Newport and Irvine.

Christopher is a longtime Zov’s fan but Catherine had never dined there, so we recently went to the Zov’s in Newport Coast. It’s a large restaurant with a classy yet casual ambiance—a neighborhood eatery perfectly suited to Newport.

Catherine’s reaction: “I love steak, especially with a good cabernet or peppercorn sauce, but sometimes it’s nice to mix it up with other flavors. Zov’s 10 Spice Prime Strip Steak is, as the title suggests, a steak rubbed in 10 different spices including paprika, cumin and garlic. The steak was juicy and the spices added Mediterranean flair that you don’t often find with steaks. It was served with garlic herb shoestring fries and fried Brussels sprouts. I couldn’t stop sneaking in more bites of the Brussels sprouts—they were my favorite!”

We’re not a fan of blue cheese, and nearly passed on the three cheese mac and cheese until our server said the blend was very mild.

We took a chance, and were pleasantly surprised at how much we enjoyed it.

“The mac and cheese was mixed with herb roasted chicken, crimini mushrooms and crumbled applewood bacon—delicious and definitely filling. If you want to try one of their desserts, I

suggest eating half of the mac and cheese and taking half to go.”

“Their risotto alla sovazzese has delicate Arborio rice, porcini mushrooms, fontina cheese and fresh herbs. The risotto is firm but soft (just how it should be) and the simple ingredients makes it a lighter entrée for summer. It paired well with the Zorzon Pinot Grigio, Friiuli Venezia Giulia 2011.

For dessert, I enjoyed the Tronco ai cioccolati, a puffed pastry filled with white and dark chocolate mousse, served with crème anglaise and raspberry sauce. I loved how light and fluffy the dish was. Sometimes I can’t enjoy all of a chocolate dessert since it’s so rich, but the combination of the dark and white chocolate ensured that there wouldn’t be a bite left on my plate.” 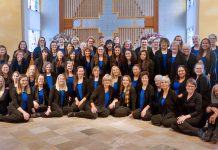 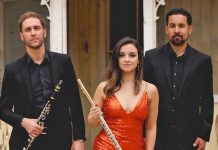 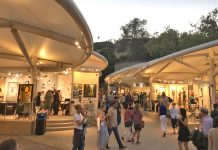