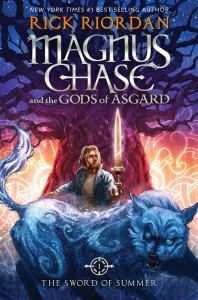 If that isn’t a grab-you-and-reel-you-in first few words of a book, I don’t know what is.

In case, however, that chapter title still doesn’t quite capture you, perhaps the follow-up lines will:

“You guys are going to read all about how I died in agony, and you’re going to be like, ‘Wow! That sounds cool, Magnus! Can I die in agony too?’ No. Just no…My name is Magnus Chase. I’m sixteen years old. This is the story of how my life went downhill after I got myself killed.”

It seems a bit of a spoiler to announce the death of the protagonist and narrator on the first page of a nearly 500 page novel, yet that is exactly what acclaimed author, Rick Riordan does in his new book, “Magnus Chase and the Gods of Asgard: The Sword of Summer.”

Easily the most anticipated release in the middle grade/young adult reading world this year, “The Sword of Summer” is ushering in a new trilogy by the man most noted for giving young readers an education on Greek mythology through the world of Percy Jackson.

In this new series, Riordan departs from the Greco-Roman and Egyptian lore he has previously based his stories on, and takes readers into the world of Norse legend, as main character, (and apparently, dearly departed,) Magnus Chase, discovers that he is the son of a Norse god.

In the book, the nine worlds of Viking myth are, after centuries of separation, growing closer together. There are whisperings of the coming of Ragnarok – a sort of doomsday, in which good and evil will do ultimate battle, and give rise to a new world order.

Of course, Magnus will find himself right in the middle of all this. After discovering his parentage, and losing his life, he

will become a part of Odin’s army, training to battle on the side of the gods. His taking up arms for Odin is not his only part in the Ragnarok story, however. Magnus, it seems, is also the central figure in a Ragnarok prophecy which says that he alone can either prevent Ragnarok, or hasten its arrival, depending upon the actions he takes.

Readers of Riordan’s earlier works will again be treated to his signature writing style, without experiencing a retooling of the same old characters. As was the case with his “Percy Jackson” novels, the story is fast-paced, and full of enough humor to keep both young readers, as well as more mature fans, engaged and entertained throughout. The characters, as well as the legends the story is based on, invite readers to embark on a new journey into a set of myths they may have been previously unfamiliar with, yet which have lent inspiration to many other popular fantasy tales over the years.

During their journey through the folklore, readers will meet many prominent Norse figures, such as Odin, Thor, Loki, and the Valkyries—all names that have sprung up in other popular stories in recent years. This time, however, they will also be able to learn about the actual, ancient legends from which these names were born.

Riordan, as a father and former middle school teacher, has a unique gift for presenting his stories to young readers in a way that keeps them coming back for more. He has said, “I think kids want the same thing from a book that adults want — a fast-paced story, characters worth caring about, humor, surprises and mystery. A good book always keeps you asking questions, and makes you keep turning pages so you can find out the answers…I think it would be a mistake to ‘write down’ to kids. They hate that. They want to be treated like intelligent and sophisticated readers, and who can blame them?”

It is this philosophy that has delivered another winner, and made Riordan a favorite in our house, and countless other homes across the world.