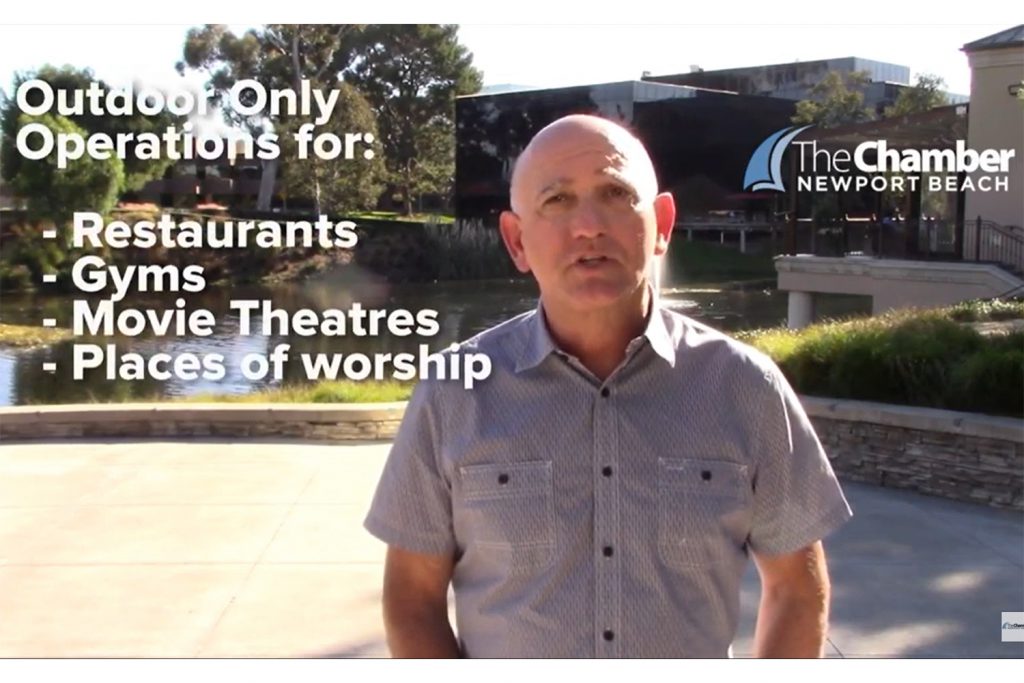 On Monday, Nov. 16, Newport Beach Chamber of Commerce President and CEO Steve Rosansky announced via a video sent to Chamber members and other businesses and community members that Orange County, and Newport Beach, were moving backwards into the Purple tier under the state’s new Blueprint for a Safer Economy.

“Governor Newsom dropped a bomb on California today at his 12 p.m. news conference,” said Rosansky in the video. “Citing a steep increase in coronavirus cases in California over the last two weeks, Newsom announced changes to the Blueprint for a Safer Economy that will go into effect immediately.”

Rosansky noted that in Orange County, the number of coronavirus cases has almost doubled from last week, increasing from 5.6 to 10.8 cases per 100,000. The positivity percentage increased by 40 percent, rising from 3.3 to 4.6 percent. Surprisingly, said Rosansky, the health equity metric remained constant at 5.5 percent.

“Based on this new data, Orange County has now moved from the red zone to the purple zone,” said Rosansky. “The uptick in the numbers and the changes rolled out by Newsom are not unexpected in light of what is happening nationwide as we hit the highest number of daily cases and hospitalizations since the beginning of the pandemic.”

“What does this mean?” asked Rosansky. “With the announced changes, 40 counties in California have moved to a worse zone, and 41 are now in the purple zone.”

“Many businesses that were permitted to have indoor operations will once again have to move to outdoor operation only, including restaurants, gyms, fitness centers, movie theaters, and places of worship,” said Rosansky. “In the retail area, stores and indoor malls now have their maximum capacity reduced from 50 percent to 25 percent. These changes will have a significant effect affect on the upcoming Thanksgiving and Christmas holidays as dining options will be limited as well as opportunities for making holiday purchases.”

Rosansky noted that “for many restaurants and retailers, a successful holiday season is the difference between profit and loss. This further tightening is sure to push more businesses both large and small over the edge, and we can probably expect to see additional businesses close starting in January.”

For more information, visit the Chamber of Commerce website at www.NewportBeach.com.