They survived the pandemic with a drive-in movie at Fashion Island and online programming, switched their traditional festival dates from April to October to take advantage of Hollywood’s fall film releases, and now the Newport Beach Film Festival has returned October 13 through 20 with a new program of 300 international films.

On Thursday, Oct. 20, the Festival will close with a showing of “Glass Onion: A Knives Out Mystery” at The New Port Theater in Corona del Mar. “Glass Onion” was written and directed by Rian Johnson and starring Daniel Craig returning as southern Detective Benoit Blanc, who travels to Greece to peel back the layers of a mystery involving a new cast of colorful suspects.

Prior to the Closing Night film screening, the Festival will host its Closing Night Gala at 5:30 p.m. at Sherman Library & Gardens, a short walk from the theater. Attendees will enjoy culinary creations by 608 Dahlia and other local restaurants, along with a hosted bar by Tito’s Handmade Vodka and live entertainment.

“The Newport Beach Film Festival is thrilled to bookend this year’s edition with two incredible films that feature stellar talent and remarkable storytelling,” said Gregg Schwenk, CEO and Executive Director of the Newport Beach Film Festival. “We are proud to bring outstanding global cinema and compelling filmmaker conversations to Southern California. This year’s program is the strongest in our 23-year history.”

Honors and “10 Actors to Watch”

The Newport Beach Film Festival has brought back its Festival Honors program and Variety’s “10 Actors to Watch.”

This year’s 10 Actors to Watch were announced on the Variety website, and include

This year’s honorees attending the Festival Honors event include Academy Award-winning filmmaker Ron Howard, who will receive the Variety Legend and Groundbreaker Award for his outstanding creative leadership and impactful artistic achievements that have proved both visionary and enduring.

Four additional honorees – Aubrey Plaza (“Emily the Criminal”), Jonathan Majors (“Devotion”), Keke Palmer (“Nope”) and Patton Oswalt (“I Love My Dad”) – will receive Artist of Distinction Awards, presented to individuals known for their contribution to the arts, philanthropic endeavors, and an overriding commitment to their craft to tell unique and bold stories.

Eddie Redmayne will attend the NBFF Centerpiece screening of “The Good Nurse” on Saturday, Oct. 15, where the festival will honor him with the Icon Award, presented to an actor or actress widely admired for their contribution and iconic role(s) in the industry.

Filmmaker Paul Feig will receive the Career Achievement Award at a screening for “The School of Good and Evil” on October 19.

This year’s honorees will also be joined by actor Adam Sandler, who will receive the festival’s inaugural Performance of the Year Award in recognition of his work in Jeremiah Zagar’s “Hustle” on Saturday, Oct. 15. 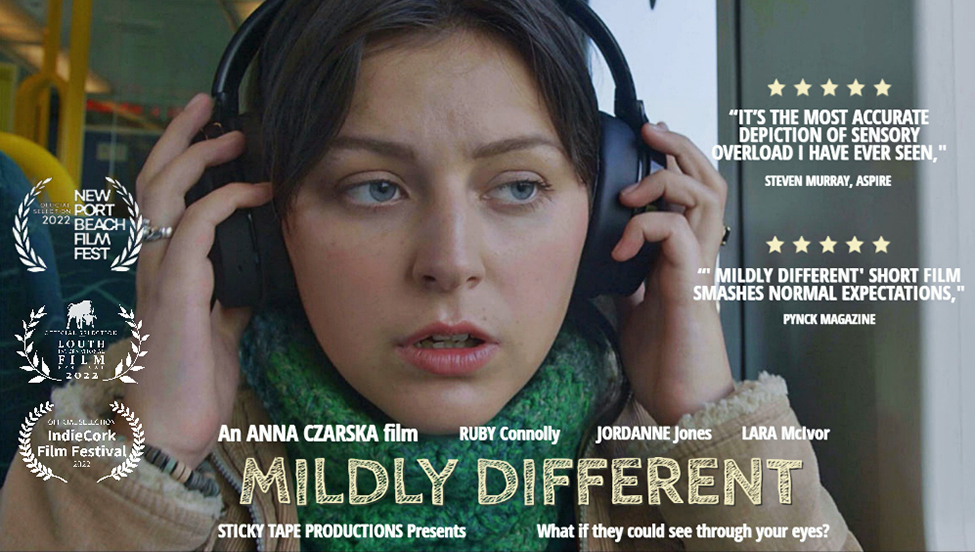 Among the many short films in this year’s Festival is a film from Ireland called “Mildly Different,” made by, starring and about autistic individuals. The film is supported by the Arts Council’s Arts and Disability Connect Scheme managed by Arts & Disability Ireland. It screens Sunday, Oct. 16 at 12 p.m. at The Lot 3 theater.

Written and directed by Anna Czarska and starring Irish actress Jordanne Jones, this live action narrative short follows a young woman on the autism spectrum from childhood to adulthood, immersing the audience in her inner world. Christina struggles to feel accepted, hindering her ability to progress forward, until the kindness of one person changes her life and restores her confidence.

According to the Art & Disability Ireland website, director Anna Czarska , who is autistic, wanted to give the audience a glimpse into what autism looks and feels like, particularly for women, as autistic individuals born as females often differ from males.

Anna herself found most information on autism outdated and male-focused, and hopes that the film will bring in understanding, acknowledgement, and hopefully more support for autistic women.

“As an autistic woman who lived most of my life without  knowing why I was so different, I wanted to bring a voice to other women who experienced the same,” Czarska told Art & Disability Ireland. “While autism as a whole is misunderstood by many, autism in women has been entirely ignored. I want to not only bring more awareness and acceptance for autism but also to give neurodiverse women a way to express  their experiences to neurotypicals. I believe this film will create an outlet for those who have trouble expressing how they differ.”

The film itself features fine, intimate performances from an outstanding cast and superb cinematography, and is well worth seeking out.

“Dear Zoe,” a new independent feature film adapted from the award-winning novel and directed by Gren Wells (“The Road Within”), will be featured at two screenings: Sunday, Oct. 16 at 5 p.m. at The Lot Fashion Island, and Wednesday, Oct. 19 at 5:15 p.m. at the Big Newport 6. Producers Brenda and Marc Lhormer (who also wrote the screenplay) plan to be in attendance at the screenings for Q&As.

“Dear Zoe” stars Sadie Sink (“Stranger Things”) as Tess. According to press material, “Dear Zoe” is a powerful story of grief and resilience told from the point of view of a 16-year-old girl: a coming-of-age drama in which teenage Tess enlists her biological father, a lovable slacker from the wrong side of the tracks, and the charming juvenile delinquent next door to help her come to grips with the death of her little sister.

“I am thrilled to bring this powerful, healing and entertaining story to the Newport Beach Film Festival, which programs uplifting and important films that really mean something,” said Marc Lhormer. “We’re so proud that the film recently won awards at film festivals in Maui (Indie Gem), Woods Hole (Audience Choice, Best Actress), Phoenix (Ensemble Cast) and Sedona (Humanitarian Award). We look forward to meeting and talking to new audiences that love and appreciate heartwarming movies.”

“The Stupid Boy,” is a short narrative film with an intriguing premise and an unlikely backstory.

The plot: In a London where there has been an increase in Christian white supremacists resorting to acts of terrorism, two worlds collide when a neuro-diverse teenager encounters a man on a suicidal mission.

The film’s writer and director is Phil Dunn—but not the same Phil Dunn from Corona del Mar whose film about celebrated OC Chef Pascal Olhats screened at the Newport Beach Film Festival in 2017.

The US Dunn, who also writes poetry, googled himself one day while attempting to see how his poetry links were performing.

“I came across a Philip Dunn from Britain a poet, and followed him on Instagram. I found out he also makes movies and surfs. I also surf, write poems and created a documentary,” said US Dunn.”

The two Dunns connected and had conversations about having parallel lives across the pond. They shared poems, creative stories and art works.

“That was when the coincidence stepped up a level,” said UK Dunn. “Not only do we have the same name, like the same things, but now also we were going to be in the same zip code due to a film festival selection. We talked about meeting for a beer or a surf, and I asked advice about hotels.”

Forget a hotel, said US Dunn, who insisted UK Dunn stay with him in CdM for the Festival.

Dunn and Dunn will be at the screening of “The Stupid Boy” on Wednesday, Oct. 19 at 8 p.m. at Triangle 2 theater. 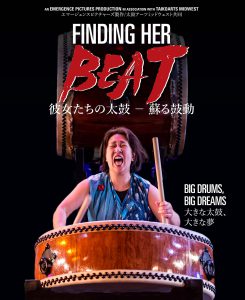 The SoCal premiere of the Documentary “Finding Her Beat” on Sunday, Oct. 16 at Big Newport 5 theater at 12:15 p.m. features a live Taiko drumming performance plus a Q&A with the filmmakers after the screening.

“Finding Her Beat” synopsis (courtesy of the filmmakers): In the midst of a frozen Minnesota winter, a Japanese drum master and Korean adoptee from North Dakota join forces to assemble the world’s best Taiko drummers in a bold effort to claim a cultural spotlight that has historically been reserved only for men.

Vulnerability, pain, and joys are shared—and we quickly see the bonds of friendship form as these talented women navigate their way through differences in culture, age, language, and performing styles. As the clock ticks toward their first performance, it becomes clear that their story has become much larger than Taiko.

Through the perspective of the five main artists, “Finding Her Beat” explores the individual themes of cultural and racial identity, the challenges professional marginalized gender artists face, the artist’s passion for a subculture that was designed to keep them on the outside, and the burgeoning hope that this historic event marks the beginning of a new era of taiko for everyone. Told both verbally and nonverbally, in silence and thundering percussion, the film organically unfolds in the lived moments of these artists.

“Finding Her Beat” was made by a predominantly female/nonbinary, largely Asian-American and LGBTQ filmmaking team and cast, when marginalized gendered and people of color are severely underrepresented in film.