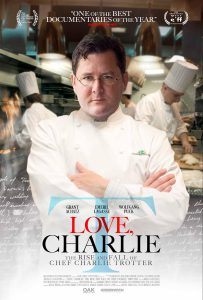 Several years ago, the Newport Beach Film Festival recognized the ever-growing popularity of films about food, wine and chefs by creating a Culinary Series that spotlights documentaries about all things gastronomic, from the art of winemaking to the unique talents of chefs.

The Best Chef in the World (United States, Short documentary)

At a time before celebrity chefs, home-cook Sally Schmitt was reinventing the way Californians eat. Opening The French Laundry in 1978, Schmitt paved the way for the organic local pallet California is famous for. She may be the mother of California cuisine but to her family, Sally Schmitt is the best chef in the world.

La Huella, Historia de Un Parador de Playa (Argentina, Feature Documentary) Twenty years ago, three friends in the prime of their lives got together to face a challenge: to build a beach inn like the ones from the fifties on the beach of a small Uruguayan town. Pure simplicity and honesty. A ranch of straw and wood on the edge of the Atlantic Ocean, where the stories of Argentines, Uruguayans, corvinas, pejerreyes, the great painter Pedro Figari, fishermen, good wines, Francis Mallmann and always fire, toast and friendship will intersect as a starting and ending point.

In the 2000s, Chef Charlie Trotter was the toast of Chicago, his eponymous restaurant one of the world’s top fine-dining destinations. A gastronomic revolutionary and a culinary bad-boy, Trotter paved the way for the likes of Anthony Bourdain and Gordon Ramsay, yet his tempestuous, competitive nature alienated many. With never-before-seen archival material and new interviews with those who loved and loathed Trotter, this absorbing, unvarnished profile chronicles the passions of a master chef and the consequences of pursuing perfection at all costs.

Master of Cheese tells the story of Will Schmid, the world’s best cheesemaker who makes his cheese in a dairy the size of a living room. He knows every cow by name, every plant in his valley and produces cheese with pure intuition. His innate talents and boundless work ethic have allowed him to produce outstanding cheese in demand across the globe. A touching life story, inspiring and educational, this film is about honest food for the plate that can inspire the world for the urgent change we need. Q & A with cast and crew after screening.

Featuring four of Japan’s leading chefs, the film explores the essence of the unique and sophisticated Japanese culture through their beliefs, creativity and human relationship while portraying the struggle of chefs in the pursuit of perfection.

The coolest film on the myth of winemaking and a dedication to all wine drinkers and the wine lovers of the world. From the bare wine fields in winter, through the cellar to the finished bottle, served tableside at high-level restaurants, this film dives into all aspects of wine; the pairing with food, the creation of great wine, the upsides and hard times on a vineyard – together with an enologist, a professor, a food scientist, sommeliers, chefs and wine experts. The film uncovers different aspects of taste and flavor, physics and chemistry, microbiology and more, to find out what is really going on when great wine is paired with exquisite food. The film is as cool and elegant as a lightly chilled Pinot Noir to a rack of lamb or a cold Chablis to oysters.

For tickets and more information on the Culinary Film Series, visit www.NewportBeachFilmFest.com.