The map allows users to type in an address to determine whether the property is within a tsunami hazard area. Local tsunami evacuation material will be added to the online map interface as it is developed.

According to a press release issued by the California Geological Survey, the tsunami hazard increased slightly in the Newport Beach area to help facilitate evacuation response actions, while the Bolsa Chica and Huntington Beach areas saw a decrease in tsunami hazard after a review of improved modeling results and higher-resolution data demonstrated that levees and ponds in these areas will help protect the public.

Although significant tsunami flooding is not anticipated in southern Orange County, harbors and coastlines may see potentially damaging currents during extreme events. 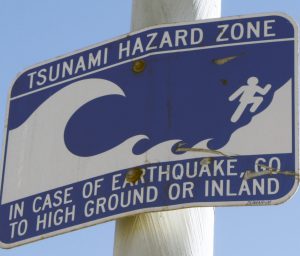 According to the large Aleutian Island scenario used by CGS, the first surges would reach Orange County in about six hours.

“That time will go by fast, as scientists and emergency planners at the federal, state, and local levels will all need to assess the threat level before issuing an evacuation warning,” said Rick Wilson, head of the CGS Tsunami Program, in the press release. “Bottom line: If you’re near the coast and feel strong shaking from a local earthquake or get an official notification to evacuate, move inland or to a higher elevation as soon as possible. A large tsunami surge might be fascinating to watch but you don’t want to be anywhere near it.”

According to the tsunami map, anything in Newport Beach west of Coast Highway from the Santa Ana River to Bayside Drive (Balboa Island, Lido Isle, Balboa Peninsula, etc.), and anything in the Back Bay area including mobile home parks and Newport Dunes, are in the tsunami flooding areas.

Most of the areas along Coast Highway south of Bayside Drive to the Laguna Beach border are safe, except Crystal Cove State Park.

In April of 2020, the City of Newport Beach began testing a new with speakers located at West Jetty View Park, Marina Park and West Newport Park.

The new Outdoor Warning Notification System is an upgraded version of the Newport Beach siren warning system, also known as the Tsunami warning sirens. The system now allows voice commands to give preliminary information and instructions.

The speaker notification system may be utilized for all hazards or disasters where immediate action from the public is necessary.

For more information on what to do if a tsunami occurs, visit https://www.newportbeachca.gov/how-do-i/find/disaster-preparedness-information/tsunamis