The Newport to Ensenada Yacht Race may get a lot of local attention since its starting point is off the Balboa Pier, but the Transpacific Yacht Race, known as Transpac, is one of sailing’s great traditions that draws sailors, and boats, from around the world, including, of course, Newport Beach.

The originator of Transpacific Yacht racing, the late Clarence MacFarlane of Honolulu, found several mainland yachtsmen who agreed to a race to Honolulu in 1906. He sailed his 48-foot schooner, La Paloma, from Honolulu to San Francisco to join them in a race back to Waikiki, but he arrived a few weeks after the great San Francisco Earthquake of 1906, so that race did  not happen.

Instead, MacFarlane sailed down to Los Angeles to join the Lurline and the Anemone for the first Honolulu Race, which started from San Pedro on June 11, 1906.

Flash forward to 2019 and the 50th anniversary of the Transpac race, which starts Wednesday. A record 95 boats are entered this year. The starting line is still off the bluffs of Point Fermin in San Pedro, and the finish is off the Diamond Head lighthouse just east of Honolulu. Total distance: 2,225 nautical miles.

Among the sailors in the race is Brian Bissell, a senior vice president at Newport Beach-based Whittier Trust. He’ll be aboard the 70-foot Grand Illusion, owned by Dave Clark. Grand Illusion won the Transpac race three times under a previous owner. There will be 11 people on board taking four-hour shifts. They expect to make it to Hawaii in eight to 11 days.

Whittier Trust, the Heritage sponsor of this year’s race, has a long history with Transpac.

In 1923, when Transpac resumed sailboat racing after World War I, the Whittier brothers sailed the 107-foot yacht Poinsettia in the Transpac.

Poinsettia was built in Germany for Crown Prince Frederick, confiscated by the Allies during the war, and brought to Los Angeles afterward by Max Whittier and his sons Don and Paul.

Poinsettia was manned by a professional captain and first mate, a cook who had spent seven years in the service of former president Teddy Roosevelt, and a crew of 14 college boys, two thirds of whom had never been to sea. A two-day long storm blew its sails to ribbons, forcing Poinsettia to turn back.

In recognition of the intrepid sailors who race Transpac, Whittier Trust is honoring their legacy as the Heritage Sponsor.

Bissell said he’s done a little ocean racing but nothing like the Transpac, although he and the Grand Illusion crew competed in the Cabo race, which took five days, and the Newport to Ensenada, essentially a one-day race.

“This boat has a good track record,” said Bissell. “It’s designed to sail really well downwind, and the Transpac, once you get into the trade winds, is primarily a downwind race. This boat has done the Transpac three times, so it is a known boat.”

So is the Pyewacket, owned by the late Roy Disney.

“They are the favored team to win,” acknowledged Bissell. “We have raced against them, they are looking good. We’ll be doing our best to keep up with them.”

That’s not the only thing the crew of the Grand Illusion has to worry about. Sleep, for example, is all but impossible below deck.

“It’s the noise,” said Bissell. “Everything that is being adjusted on the boat creeks, there are people stomping around on the deck, and as soon as it gets quiet, you hear the snoring. It’s almost impossible to sleep. You need earplugs.” 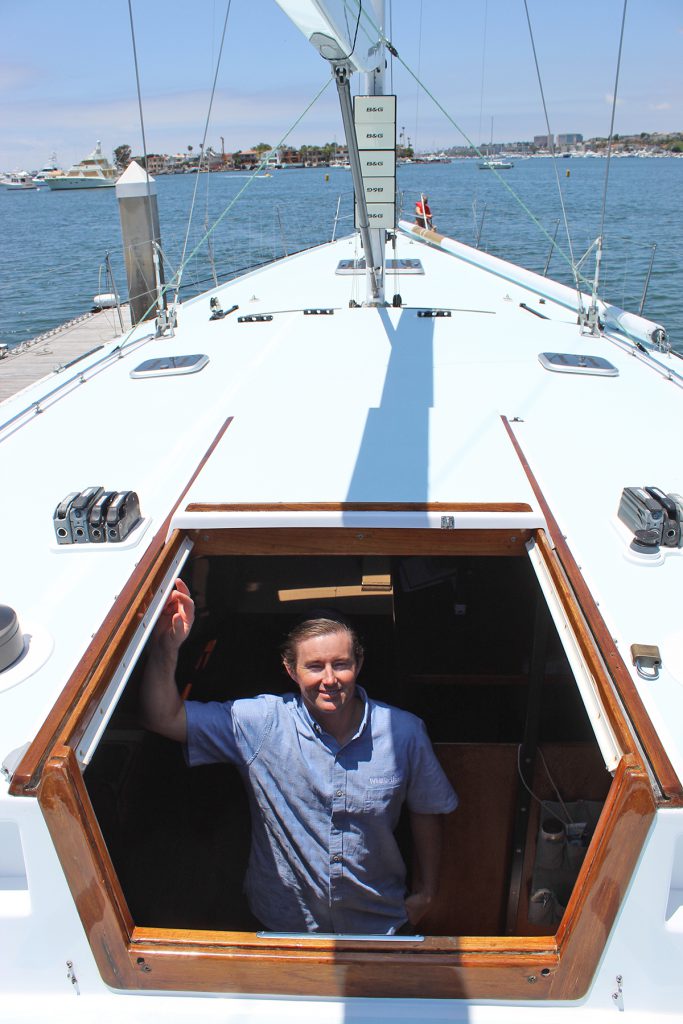 The quarters are simple and basic: fold out cots, a stove for boiling water for coffee and the occasional hot meal, and a bathroom (located away from the sleeping area).

The real challenges, said Bissell, is determining the strategy where on the course to sail. Everyone picks a different route, so weather figures into the equation.

“We are focused on the weather forecast, where the high and low pressure systems are moving around, where we want to best position ourselves to have the best breeze,” said Bissell. “And night sailing is a challenge. It’s disorienting, sometimes you can’t see the horizon so you are relying on the instruments. The sails have some glow in the dark elements but there can be debris in the water, or whales. You have to keep an eye out for all that during the day, but at night it’s near impossible.”

That’s the reason the crew sleeps with their feet toward the bow. A sudden stop means they hit their feet not their head.

Another challenge they can encounter is a squal, or storm, but in this case, that’s a good thing.

“That’s where the best breeze is,” explained Bissell. “The squalls move nearly the same speed this boat moves, so if you can get next to one you can ride the squall and get a little extra boost from the wind.”

Grand Illusion’s start day is Saturday, two days after the smaller or slower boats have left port. There are three start dates. Each boat has its own rating based on dimension and design.

“You might owe some boats time, or they might owe you time,” said Bissell. The race officials do a corrected time at the end, and rank the boats.

“Pyewacket is closely rated to us, but I think they owe us a little time,” said Bissell. “We need to be close enough to finish within the corrected time.”

Bissell may be the only Whittier Trust aboard Grand Illusion, but he’s not the only sailor in the Newport office.

“We have six or seven champion sailors that work in the Newport office,” said Bissell. “At times we compete against each other, so it makes for good office banter.”

Bissell said sailing has always been in his family. His grandfather and father were sailors, and Bissell learned to sail at Lido Island Yacht Club and Newport Harbor Yacht Club.

Even with that heritage, Bissell said he’s excited to be part of the Transpac race.

“I liken it to hiking to the top of a mountain. Regardless of how we do, the accomplishment of getting everyone there safely and sailing that amount of distance together is going to be an amazing experience.”

“There are a lot of translatable skills to the wealth management industry,” noted Bissell. “As a sailor, you are constantly faced with changing conditions, and in wealth management, you can’t just set a plan in place and not revisit it. Tax laws change, family dynamics can change, the market can change, so you have to be able to change and adjust to changing condition. Sailors have been bred to handle that with ease.”

“What is interesting about a sailor, which is what draws Whitter Trust to look for them, it requires competitiveness,” said Greg Custer, who runs the Newport office. “You have to be able to make intelligent decisions, sometimes on the fly, that are going to have significant impacts on what you are trying to accomplish. That lends itself to what we are trying to do in the office for our clients.”

For more information on the Transpac race, visit 2019.transpacyc.com.