The City of Newport Beach claims that annually there are seven million visitors coming to this resort and shopping mecca.  But then, they’re only counting people.

Other important visitors drop in as well, none of which bother to check with air traffic controllers at John Wayne Airport before making flawless landings in Upper Newport Bay – which at the peak of the bird migration season can swell numbers to more than 20,000 fulltime avian residents and “guests.”

Interchangeably referred to as the Back Bay, this wildlife preserve is regarded as an “international biological diversity ‘hot spot,’” and “a critical estuary,” and is one of only two large natural estuaries remaining in Southern California.

It is “a unique eco-system” says said Heather Cieslak, Operations Director for the nonprofit Newport Bay Conservancy.  She holds an MA in Public Administration from Cal State Northridge, coupled with a “passion for protecting the environment.”

Birds are the most noticeable of Back Bay habitués, but the waters (a mix of ocean brine from Newport Bay, and nutrient-rich drainage that flows out of San Diego Creek) are home to nearly 600 plant species – only 260 considered to be native, two being endangered — and 450 animal species that thrive in the various habitats.   More than 240 bird species have been ID’d in the bay. Some are considered extremely rare or seriously threatened, such as the Least Tern, Belding’s Savannah Sparrow, Ridgway’s Rail, Peregrine Falcon and Black Rail. 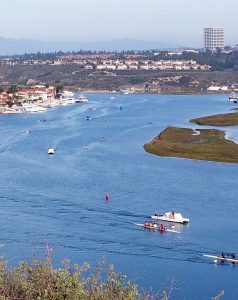 Reaching the bay isn’t a simple flight for our feathered friends; it is wrought with more dangers than Mother Nature had originally planned – threats beyond storms, wildfires, food scarcity, competitors and predators.

There are man-made impediments, such as power towers and high-voltage lines, tall buildings, wind-farm propellers, hunters, and pollution.

In short, though the birds seem content floating and pecking in the seeming calmness of the food-rich bay, life for all of them ain’t necessarily easy.

It’s estimated that half of all birds lose their lives along the north/south migratory flyway.

For those interested in obtaining a complete list of birds in the Upper Bay, the Conservancy has at their front desk a pamphlet naming those commonly seen, with a check-off for serious spotters.

Five viewing areas have been established along the Back Bay Road and the western trail adjacent to Irvine Blvd. A guide map is also available at the county’s Peter & Mary Muth Center, 2301 University Drive (across the street from the YMCA).

The reality is, the mud flats and salt marshes are difficult to reach to see estuarial life unfolding, and the channel waters are dark, obviating easy viewing of the 74 deeper-dwelling denizens.

But the Conservancy has solved that challenge, for late last year they completed construction of a 1,200 gallon saltwater “estuarium” in their exhibit hall that “teaches about the connection between all the different habitats in the area: fresh water, saltwater, marshes, upland areas and mudflats – all working together to form an entire ecosystem,” Cieslak said.

For those less intrepid among us who wish not to explore the Upper Bay by kayak, one easily can study such creatures as a Round Ray, Bat Ray, Thornbach Ray, Sea Star, Barred Sand Bass, Leopard Shark, Spotfin Croaker, and Sargo Spotted Sand Bass.

The tank is a two-way world, as several of the cartilaginous rays swim against the aquarium glass, seemingly staring at us humans in the foreign air-world beyond.

Fish and birds comprise only part of the rich animal “classes” calling the Upper Bay home.  There are also 20 mammals, 50 reptiles and amphibians and insects aplenty.

Atop the food chain prowl coyotes and bobcats, both keen hunters that go after raccoons, opossum and squirrels, and rats and mice, as well as snakes and lizards and even insects – each also occupying a link along the food chain.

For most of the year, the food chain is alive (and sometimes, not alive) and well in the bay.

The Back Bay Conservancy, with but one full-time employee (Cieslak) and two part time staff, offers a full plate of activities for residents, schools, clubs and other organizations.

Complete information about joining, participating in cleanups, specialized classes, group tours, or donating can be found online at newportbay.org.

The Conservancy’s efforts receive full support and cooperation from Orange County Parks, California Department of Fish & Wildlife and the city of Newport Beach.