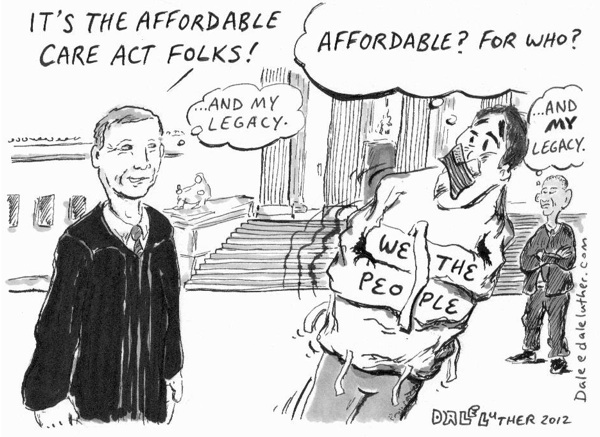 * In my opinion and that of the Association of American Physicians and Surgeons (AAPS) the Supreme Court Decision supports lies and corruption.

On June 28, a day that should live in infamy, the U.S. Supreme Court upheld the Patient Protection and Affordable Care Act (PPACA), which sweeps away liberty and property rights in a vast expansion of federal power over one-sixth of the American economy.

While five Justices agreed that Congress does not have the constitutional authority under the Commerce Clause to mandate purchase of federally approved third-party payment (“insurance”) plans, supposedly conservative Chief Justice Roberts says the mandate is constitutional as a tax.

If the mandate is a tax, then of course the President and the Congress lied when they repeated endlessly that it was not a tax. Alternately, congressional intent, which the Courts often scrutinize in their rulings, doesn’t matter. The Court will resort to word games and other intellectual contortions in order to rubber stamp whatever the ruling powers desire.

The Supreme Court provides no protection against Congressional motives to enrich Congressmen and their campaign contributors. More evidence is emerging of back-room meetings of the White House and Congressmen with special interest groups as the Act was written. Financial analysts carefully watched the Court’s decision because it will create winners and losers in the stock market.

Chief Justice Roberts said that the decision does not imply that the Act is wise or good policy.

“Coverage is not care,” stated Jane Orient, M.D., executive director of AAPS. “The Act will increase costs, sharply restrict availability, and deny treatment to the old and the sick. AAPS supports the repeal of PPACA and the restoration of freedom.” “The key to patient protection and affordability is the patient-physician relationship and free-market competition,” said Orient. Both are imperiled by PPACA.

The American Medical Association (AMA) president Jeremy Lazarus, M.D., applauded the decision, stating that it means “millions of Americans can look forward to the coverage they need to get healthy and stay healthy.”

Personally I think that Chief Justice Roberts reinterpreted the law so that he would be remembered as the Chief Justice who gave the nation medical care.

* The Doctor Patient Medical Association in Washington, D.C. issued a statement through Kathryn Serkes, DPMA Chairman, in response to the Supreme Court ruling. She was on the stairs of the United States Supreme Court when the 5-4 ruling was issued.

“Most doctors don’t believe that PPACA will actually help patients get better access to medical care. Doctors clearly understand what Washington does not – that a piece of paper that says you are ‘covered’ by insurance, or ‘enrolled’ in Medicare or Medicaid does not translate to actual medical care when doctors can’t afford to see patients at the lowball payments, and patients have to jump through government and insurance company bureaucratic hoops.”

PPACA is a painful deception – these are promises of care that the government cannot deliver unless doctors are forced to participate in system in which they have lost confidence. Unless something changes, many doctors have reached a tipping point and are ready to start bailing out. When 8 out of 10 doctors (from a recent DPMA survey) are thinking about quitting, we have a disaster in slow motion that is just beginning.

Physicians are literally begging government to get out of the way so they can practice medicine and take care of patients. We need to get doctors and patients together to take charge and work on solutions.

* Did you ever notice that when the President of the United States reverses himself the media refers to his position as “evolving,” as with his reversed stance on gay marriage – but when Romney changes his mind on healthcare policy the media refers to it as “flip-flopping.”

* Two of the Angels’ best hitting rookies ever are Tim Salmon and Mike Trout. I am searching North, South and Central America for any baseball players whose last names are Bass, Cod. Herring, Minnow, Mackerel, Shark or Tilapia.

* The Dodgers have picked up former Angels Bobby Abreu, Juan Riviera, Adam Kennedy and hitting coach Mickey Hatcher. They could call themselves “The LA Dodgers of Anaheim.”

* On a similar note there is a pelican-shaped and painted mailbox in front of a house on 18th Street in Costa Mesa. Now if everyone in Newport Beach would do the same we could call our city “The Pelican Flats at Newport Beach.”

* Let’s close with a few funny words of wisdom from my four-year-old granddaughter Brooke. While visiting Newport Beach a few weeks ago we took her for a swimming lesson. At dinner that night my daughter asked Brooke what she had learned that afternoon. Brooke’s response was, “I learned that the goggles hurt a lot less when you take them off.”

Michael Arnold Glueck, M.D., Newport Beach, is an ornery and cynical curmudgeon who writes “Deep Thoughts from Dr. Mike” for the NewportBeachIndy.com. He is on the National Advisory Board of PPMA.

Letter to the Editor: No Good Reason to Support Electing our Mayor

Letter to the Editor: Electing a Newport Beach Mayor is Wrong

Letter to the Editor: It’s Time to Elect Our Mayor