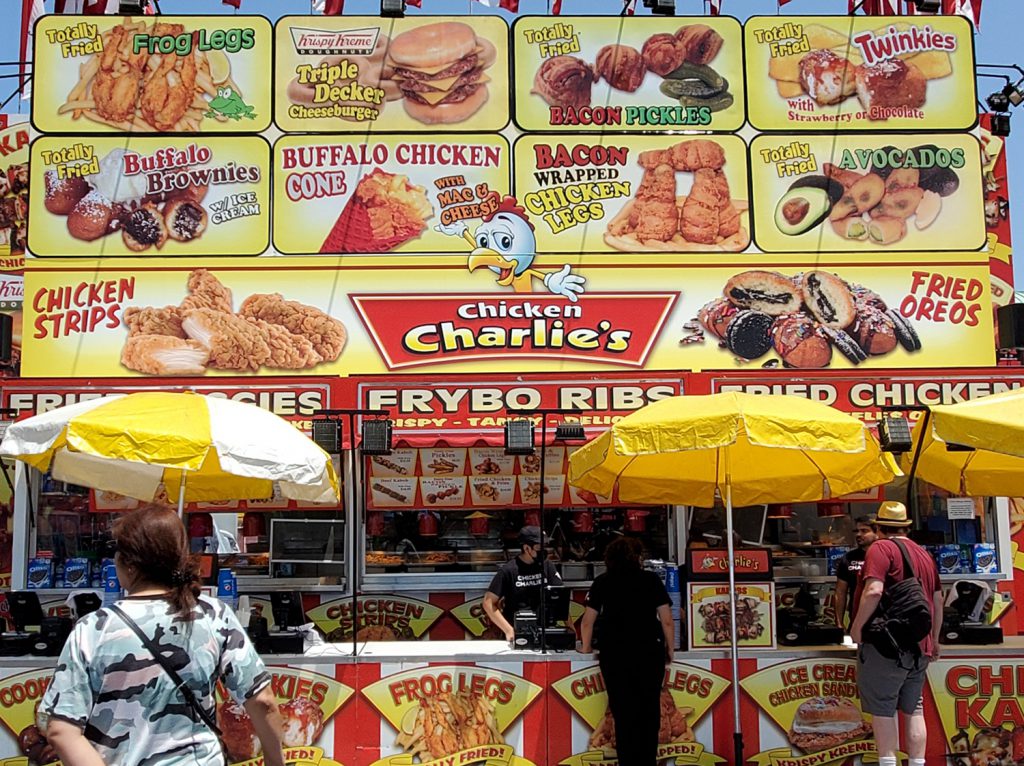 Every year, food vendors at the Orange County Fair try to outdo themselves by concocting crazy cuisine that normal people would never think to make at home. Those normal folks turn into food fanatics at the fair and eagerly line up to buy mouthfuls of decadent delights.

This year is no different. The new items guaranteed to please adventurous foodies range from deep fried hot dog bites to fried ice cream, while encore dishes include fried Oreos, fried Twinkies, and a triple-decker cheeseburger with a crispy cream donut serving as the bun.

On opening day, I headed straight to Chicken Charlie’s, a dependable purveyor of all things fried. My goal: the Buffalo Chicken Mac & Cheese, served in a large waffle cone. The combination makes sense. The sweetness of the waffle cone offsets the savory spices of the buffalo chicken and the mac & cheese, and the cone serves as a good vehicle for getting the mixture into your mouth. There is plenty of chicken mixed in with the mac & cheese to make this dish a hearty meal. And yes, I did eat the entire thing.

For the burger, crushed flamin’ hot Cheetos are used to coat the top and bottom of the bun, and whole Cheetos are sprinkles on top of the burger patty. The traditional fixings along with the burger make this a hearty meal that’s messy yet delicious.

And then there are the pickle slices topped with melted cheese and a generous coating of crushed hot Cheetos. This was my favorite dish at the fair so far. The sweetness and crunch of the pickles works perfectly with the Cheetos and cheese sauce.

I somehow saved room for the fried Buffalo Brownies (brownie bites with spicy sauce) topped with ice cream from Chicken Charlie’s. This was a good dish, but relatively normal compared to the other dishes.

The traditional foods such as the ever-popular turkey legs, food wrapped in bacon (because everything is better with bacon), BBQ meats, and my perennial favorite, Tasti Chips.

Not sure what to try? Come to the OC Fair on Thursdays, when dozens of food stands offer $3 tastes between 10 a.m. and 4 p.m. The tastes vary week to week, and listed on the fair’s website at https://ocfair.com/oc-fair/things-to-do/food.

After you consume your cuisine, head over to the Wine Courtyard to sample award-winning wines from one of the most competitive wine competitions in California.

The OC Fair has headline acts every night in the Pacific Amphitheater, but The Hanger music venue is proving to be popular with tribute bands, and at a lower price.

Tribute bands have made a big comeback, judging by the overflow crowd that enjoyed last Friday’s performance of Elton—The Early Years, a tribute to Elton featuring Kenny Metcalf as the music legend.

Metcalf was spot-on in replicating early Elton John in concert. I saw the real Elton several times in the 1970s, including his famous Dodger Stadium concert, and Metcalf had the real Elton’s mannerisms and piano playing down perfectly. Even his backup musicians looked similar to the real ones.

Metcalf drew songs from Elton John’s diverse and lengthy catalogue, and even ventured into album cuts from Madman Across the Water and other gems. The crowd loved every moment, cheering and singing along.

A slew of tribute bands are still to come at the Fair, including Arena and Substance (Tributes to Duran Duran and New Order) on July 30, and Queen Nation (a tribute to Queen) on August 4.

Tickets to the Fair must be purchased in advance (no fees) on www.ocfair.com. Get tickets early, as weekend dates have been selling out due to limited daily capacity.

The Fair will open each day at 10 a.m. and close at 11 p.m. on Wednesdays and Thursdays and midnight on weekends.

General parking is still $10, $20 for buses and limos, credit card only. The free shuttle from Experian and OCTA’s OC Fair Express bus service will not be available this year. Carnival tickets are also on sale now so fairgoers can skip the ticket booths, and tickets for concerts in The Hangar and Pacific Amphitheatre can be found at ocfair.com/entertainment.

A word of caution: Try and go to the fair earlier in the day when the traffic is lighter and so are the crowds. The traffic congestion around the fairgrounds ranges from reasonable to ridiculous, especially in the evening. I spent nearly an hour Friday night stuck in bad traffic, taking side streets only to be rerouted in the wrong direction, and finally parking nearly a half mile away in a remote Orange Coast College parking lot. At least I walked off the calories consumed with the order of Tasti Chips I munched on while trudging back to my car.