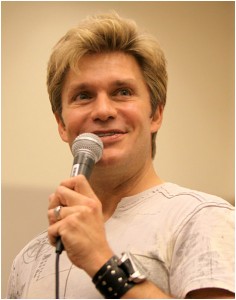 “What is it about Star Trek that resonates with so many people?” Curtis Webster asked.  “Why after all these decades are so many people in love with it? There’s a whole new franchise, why is the myth being regenerated?”

St. Mark Presbyterian Church is nearing the end of a four-week series called “A Question of Identity.” Curtis Webster, interim pastor at St. Mark, is a long-time sci-fi fan. He designed a special series exploring the cultural significance of the current resurgence of interest in super-heroes, sci-fi, and fantasy, and he is pleased with the response.

“Our audiences are really enjoying the presentations,” Webster said. “They like the chance to discuss them, and are telling their friends about it. All ages can relate in some way. I’ve been using familiar super-heroes like Iron Man and Captain America, so we don’t have to go over the basics; we can get to the meat of it.”

“When I was a boy and my parents would go out of town, I would stay with my grandmother and her sister,” Webster said. “I had to get my chores done in time for them to watch the afternoon soaps, and they talked about those characters as if they were real people. I thought it was so silly to put so much energy into fictional characters. Then one day I found myself at the first of the month sitting outside Rexall Drugs, waiting for the new comic books to come in. I was desperate to find out if Spiderman was going to defeat the Green Goblin, and stay with Mary Jane. I had an epiphany. I was just as hooked as my grandmother and great-aunt, but by a whole different set of characters in a whole different kind of medium genre.”

“It wasn’t too much later that I was involved in a Christmas Eve play at my church where I was a little boy who happened to be at the inn in Bethlehem on the night of Jesus’ birth,” Webster continued. “That experience really brought the Christmas story to life for me.”

“Ever since then I’ve been fascinated, not just with narrative, but also wondering why stories are so important to us. Narrative is to the human soul as oxygen is to the human lung. Everybody loves stories; stories carry cultural values forward. I don’t know anybody who doesn’t have a favorite book or TV show involving a fictional character.  What is it about narrative that we all resonate with? I’ve studied this for years. As a pastor, I have to take what I learn from this, and apply it to preaching and Bible Study and bring the Bible to life.”

“We’d get a lot more people excited about reading the Bible, if they realized it’s first and foremost a narrative,” Webster explained. “For instance, King David is an absolutely fascinating character, yet we don’t treat him as such. Let’s look at the narrative of David’s life, his struggles and mistakes, and see what we learn about overcoming our flaws, about finding redemption. Jesus used parables because He could make a point, and people listened.”

So far the series has dealt with Iron Man, Captain America, and a sci-fi film called “Yesterday was a Lie.” Next Wednesday, July 31, “Pilgrim of Eternity,” the first episode in the web series “Star Trek Continues,” will be presented. Vic Migogna, who portrays Captain Kirk in the series, will discuss the episode, and the continuing relevance of “Star Trek,” along with Webster.

For information, go to stmarkpresbyterian.org