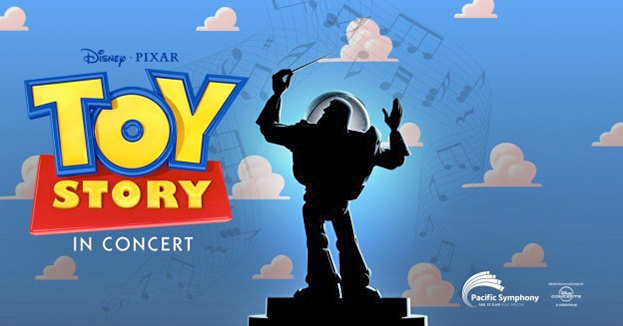 The Pacific Symphony and Hollywood have a fruitful, symbiotic relationship.

Many of the Pacific Symphony musicians have played on movie soundtracks, most notably Jim Self, who performed the iconic tuba notes in the movie “Close Encounters of the Third Kind.”

The Pacific Symphony has also become known for performing film scores live as the movie is shown on a large screen suspended over the audience, including “Casablanca,” “The Wizard of Oz,” and many others.

On Saturday, Aug. 21, the symphony returns to Pacific Amphitheatre at the OC Fair & Event Center in Costa Mesa for the West Coast premiere of Disney and Pixar’s “Toy Story” in Concert—Live with Orchestra.

In “Tory Story,” two rival toys—a lanky, likable cowboy named Woody and Buzz Lightyear, the fearless space ranger—vie for a place in the heart of their owner, Andy. The toys plot against each other, but when they’re separated from their human, they find a way to work together as friends to be reunited with Andy again.

Considered by many to be one of the best animated films ever made, “Toy Story” received three Academy Award nominations, including one for “You’ve Got a Friend in Me” by Randy Newman. Pacific Symphony musicians will perform Newman’s memorable, touching score live as the film – with its soundtrack removed – is shown on a large screen. The event is led by guest conductor Sarah Hicks.

Single tickets for “Toy Story in Concert” are on sale starting at just $25. For more information, please visit www.PacificSymphony.org.

COVID-19 safety protocols continue to evolve at a rapid pace and audience safety is a priority. In partnership with the OC Fair & Event team, the symphony will be using current CDC recommendations to create reopening policies and procedures. For the most up-to-date safety information, please go to www.PacificSymphony.org/Safety.

Picnicking Area: The main designated picnic areas can be found at Plaza Pacifica, Pacific Amphitheatre’s brand-new lobby and entrance area. Here, you will find a variety of picnic tables that are available on a first-come, first-served basis. For a guaranteed picnicking spot, patrons may enjoy their food from the comfort of their assigned seats inside the amphitheatre.

Food: You are welcome to bring your own picnic — including wine— or, if you prefer, you may purchase food from onsite vendors. Picnics purchased through Pacific Symphony are available for pickup on the Plaza Pacifica, near the picnic area. For your safety, please note that barbecues, folding tables, umbrellas and chairs are not permitted inside the Pacific Amphitheatre venue.

Beer Policy: Unfortunately, outside beer is not allowed on the property at Pacific Amphitheatre. Beer is available for purchase from several onsite vendors.