The Film Festival bult upon that success with its own Honors Awards that recognized noted industry veterans for their body of work.

Last fall, during the run of the Newport Beach Film Festival in its new October slot (moved from April), the Film Festival hosted their Honors program and the 10 Actors to Watch awards at the Balboa Bay Resort. 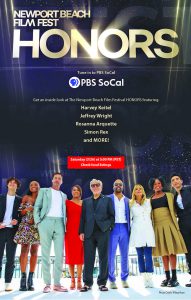 Both events were caught on film and have been edited into a half hour show called “Newport Beach Film Fest Honors” that will premiere on PBS SoCal this Saturday, March 26, at 5 p.m. It will also be available for streaming on the network’s website at https://www.pbssocal.org.

The Film Festival recently held a VIP preview of “Honors” at The Lot in Fashion Island.

Prior to the Screening, NB Film Festival Co-founder and CEO Gregg Schwenk introduced the film and recognized both the partnership with Variety and the behind-the-scenes work of Gary Sherwin and the team at Newport Beach & Co.

He also thanked Producer Maria Hall Brown and PBS SoCal, whom he said “have been partners of ours from the very beginning, whether it was the great first interviews we had on Real Orange all the way through to PBS SoCal being one of our steadfast supporters of our incredible documentary lineup, and the partnership with what you are going to see tonight.”

“It’s a great partnership that celebrates the rich diversity of storytelling and filmmaking in Southern California and how the Newport Beach Film Festival reflects that,” added Schwenk.

Schwenk then thanked Variety, noting that the Festival originally presented Variety’s 10 Cinematographers to Watch, which grew into the 10 Brits to Watch, and now 10 Actors to Watch.

“Variety is the bible of industry trade publications and has been such a great partner, and continues to bring us some of the best talent and amazing behind-the-scenes discussions that you can see anywhere, and some of those are captured tonight in what you’ll see,” said Schwenk.

And finally, Schwenk thanked the Balboa Bay Resort for their partnership, noting that “it’s such a beautiful location, it’s a beautiful reflection of Newport Beach and what makes Newport Beach unique and special.”

As to the PBS SoCal program, Schwenk said that this is proof of concept for what the Festival can do.

After viewing the “Honors” program, I agree with Schwenk —this is not another awards show. In 30 minutes, the program manages to capture words of wisdom, reflections and poignant memories of the honorees, including Rosanna Arquette (Icon Award), Harvey Keitel (Lifetime Achievement Award), Ray Liotta (Icon Award), Jeffrey Wright (Legend Award) and others who tell stories about their careers, how they got to where they are, and what inspires them.

Ironically, the “Honors” showing this Saturday comes a day before the Academy Awards, which is known for a lengthy, drawn-out affair where inspiration is often absent and glitz usually takes center stage. Perhaps if more awards shows took their cue from the “Honors” program and focused on honoree stories, the scope of awards shows might be more impactful.

As Schwenk noted, storytelling is what it’s all about, and the honorees in “Newport Beach Film Festival Honors” have worthwhile stories to share.