Summer is ending soon, which means the Mariner’s Mile sewer pipe construction project is ready to resume on Coast Highway.

A presentation by the Orange County Sanitation District at Cliff Park community center last weekend provided details on Phase 2 of the Mariner’s Mile project, which is scheduled to begin this month and finish in May.

“It looks like a slam dunk compared to Phase 1,” said local resident Lloyd Dalton, one of several residents that attended the presentation.

There were a few glitches, he noted, but overall it wasn’t too bad, although businesses were definitely affected. Phase 2 seems to be a good plan, he said. The work has to be done, so the potential impact can’t be avoided, Dalton noted.

There are several projects currently underway in Newport Beach or slated to start during the next several years, said OCSD Senior Staff Analyst Tanya Chong.

To mitigate the impact of the various NB projects, OCSD developed a program to look at all the projects as a whole rather than individually, Chong explained, “so we can understand the impact that all of these project have at any given time.”

The project also involves the city of Newport Beach and Caltrans, since it runs along Coast Highway.

“A lot of coordination going on between the different agencies on this project,” Chong said.

They hope to learn from Phase 1 work and apply to Phase 2, Chong said. It’s a flexible plan and they are working with both the city and Caltrans to determine the best methods to minimize the impact.

Project Manager Don Cutler briefly went over the work done in Phase 1, which was completed in May. That portion of 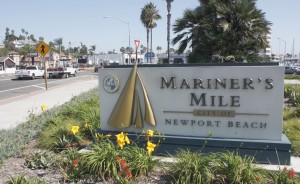 the project included some complicated elements, including cured-in-place pipe work, which places a flexible liner in the existing pipeline, the liner is inflated to fit snugly within the pipe and then hot water is pumped in to cure the liner and make it rigid.

A tower to feed the flexible liner into the pipe and a trailer mounted boiler system to heat and pump the hot water will both be built for the CIPP process.

They also used micro-tunneling, jack and bore, and open trench work, he added.

For Phase 2, they will predominantly use the cured-in-place pipe work, which will stretch from the Bitter Point station near Superior Avenue to just past Newport Boulevard, on the north side of PCH.

There will also be two short areas of open trench work, he added, one near Newport Boulevard and the other east of Dover Drive.

Also in Phase 2, a portion of the existing pipeline will be abandoned and filled with concrete.

“It is very important to go back in and fill those lines,” he noted.

If there is a leak or for some reason a pipe opens up, soil can get inside and create a void underneath the road, which could create a sinkhole, he explained.

The abandonment will happen on pipes on both sides between Newport Boulevard and Dover Drive.

Both the CIPP and abandonment work needs to go in directly on top of the pipe, Cutler explained, which limits how the construction work and equipment is placed.

“We don’t have a lot of flexibility on where we excavate,” Cutler said.

Most of the CIPP work will be west of Newport Boulevard, he explained. From that work, residents should expect construction noise and equipment, reduced lanes of travel during work hours, weekend work, and a styrene odor during the curing process.

“While it is an impact, it is a temporary impact,” Cutler said.

“There is no way we can get this done with no impact whatsoever,” Chong said. “We wish we could promise you that in every particular area that we’re doing construction that the hours are going to be from ‘this to this’ and there won’t be any other negative impacts other than one lane closure (but that’s impossible).”

There can be a variety of unexpected hurdles during construction, Chong added.

“There are a lot of unforeseen conditions that can happen during construction and we’re going to do our best to communicate that out to (the public),” she said.

OCSD crews will try their best to minimize the impact, she added, but she doesn’t want to gloss over the negative impacts the project will create.

Their goal is to maintain two lanes of traffic, Cutler said.

“It’s your goal, but can you physically do that?” one resident in attendance asked.

After some back and forth, Cutler said that with the CIPP work there are less obstructions that would force work crews to reduce the number of lanes of traffic, but for the abandonment work, there are cases where there might be more of an impact and they may not be able to maintain two lanes of traffic.

“There are going to be some locations where we really need to work together and sometimes it is going to be temporary impact,” Chong added.

On top of the traffic concerns, they also have to consider the impact on the local residents and businesses, she noted.

Both emphasized the dedicated construction hotline that people can call for specific information on the Mariner’s Mile project.

Although there will be an impact on traffic, residents and businesses, this is work that needs to be done, both emphasized.

At over 50-years-old, the pipes are nearing the end of their useful life, Chong noted.

The district was prompted to replace the pipes after viewing and considering the condition of the current mains, Cutler said.

“They’ve seen several years of service,” and are in poor condition, Cutler said.

Most people don’t think about their sewer lines until they have a leak, she said, but that’s the opposite of what OCSD is trying to do.

“If we were to use that same philosophy at the Sanitation District and just wait until a problem comes up, wait until there is a blockage or a leak in a pipe, that would be very irresponsible,” she said.

She gave an example from 1989, when a sewer pipe broke near the Balboa Bay Club.

“There was sewage that flowed onto the street and had to be diverted into the Newport Harbor,” Chong said.

For more information, call the construction hotline at (714) 679-2088, email [email protected], or visit ocsewers.com/NBProgram or newportbeachca.gov/trending/projects-issues/mariners-mile-sewer-construction-project-ocsd.