Orange County may sparkle, but behind that façade lies an ugly problem that needs to be recognized, dealt with and stopped.

About 350 people learned more about the problem of human trafficking and what can be done about it at the inspirational Priceless Luncheon to End Human Trafficking at the Balboa Bay Resort.

The recent Priceless Luncheon raised more than $230, 000 for Vanguard’s Global Center for Women and Justice (a faith-based organization that seeks to create a just world where women and children are safe, respected and valued) and its advocacy and educational programs.

“Victims of human trafficking are not always obvious, and just because someone is raised in a privileged home does not mean that they cannot fall prey to a predator,” explained Jasmine Shodja, chair of the luncheon and vice president of Wells Fargo Bank. “The best way to put an end to this horrific problem is to educate those around us to see the signs and speak up. By watching the ripple effects of the work done to combat human trafficking here and around the world, and being a small part of the force behind it is an inspiration and a reason to face every day with strength and hope.”

The audience heard first-hand how this can happen. By way of video, Rachel Thomas, co-founder of Sowers Education 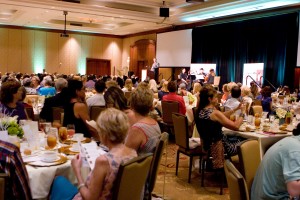 Group, shared her experiences after being approached by a modeling agency when she was in college. Thrilled at the offer and charmed by the agent, she filled out her W9 and showed up for a scheduled photo shoot. The “agent” then sold her off at music video shoots and parties, and threatened that if she didn’t do as instructed, he would hurt her family.

Rachel feared for her life and that of her family; she knew the “agent” had their address from the fake W9. She was eventually freed by police and, along with her husband, has since founded Sowers Education Group, dedicated to raising awareness on trafficking and empowering its survivors.

Ed Arnold, host of the event and retired news anchor, introduced Dr. Sandra Morgan, the keynote speaker. Dr. Morgan is the director for the Global Center for Women and Justice at Vanguard University.

“What injustice brought a 12-year old standing in the door of a legal brothel? Why was a 14-year old California boy being sold for sex by his own mother and stepfather?” asked Dr. Morgan. “What can I do? It’s so big we can feel overwhelmed and think our little bit won’t matter. Our faith in God compels us to respond. Study the issues, be a voice, make a difference. If we do not study first, we may say the wrong thing or do harm when we mean well.”

“We are going to educate every emergency room and every individual, because this is happening in our own community, and these human trafficking victims have worth and value,” Dr. Morgan said.

The luncheon concluded with awards for those helping end human trafficking. Awards were given to the Orange County Transportation Authority; human trafficking survivors Pabitra Sunar, Chandrakala Badi and Devisara Badi; director of The Dream Center Kyla Smith; and Betsy Tarbell, for her service to The Salvation Army, United Way and Women of Vision.

The number for the National Human Trafficking Hotline is (888) 373-7888. For further information, visit vanguard.edu/gcwj.