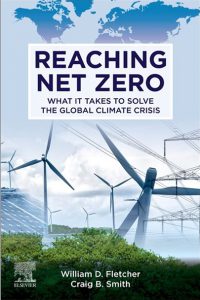 Greek philosopher Heraclitus in the 6th Century BC postulated, “The only constant is change.” Might he have included earth’s climate within that statement?

Slow forward 2,600 years to August, 2020, the release date of the comprehensive, 350-page, first edition of “Reaching Net Zero: What it Takes to Solve the Global Climate Crisis,” a book by Newport Beach octogenarian authors William Fletcher and Craig Smith.

The book is the culmination of a three-year effort, which included copious amounts of research, expert review, and multitudinous rewrites.

The fact that Elsevier, the world’s second-largest publisher of scientific books, picked it up immediately attests to “Reaching Net Zero’s” comprehensive global appeal.

In their description, the authors explain that their book “addresses the imminent need to fully understand the causes, effects and evidence of global warming…in a concise, readable manner, while providing an in-depth reference for readers who want more detail.”

Apparently, in their writings, they have conquered the challenge of appealing to a broad spectrum of readers: first and foremost, the general public, said Smith, but also academics in climate and environmental sciences, specialists in earth sciences and environmental studies, and others in science, technology, economics, politics, government, plus those interested in doing something about global warming.

Fletcher, 81, and Smith, 82, both long-retired senior executives with major global corporations, had met in early 2018, at a meeting with then Congressional candidate Harvey Rouda.

“One of us asked Rouda what he thought was his most important issue,” recalled Fletcher, “and he replied ‘global warming.’”

That led to follow-up discussions between Fletcher and Smith, during which “Craig suggested we write a book.”

He had been a successful author and knew the publication process, having already scribed two weather related books (one dealing with rogue waves, and the other with lightning phenomena). Smith’s publication resume is extensive: 11 books (six nonfiction), two published by the Smithsonian Institution; two by the publisher of their current book, Elsevier; one by the National Academy of Sciences; four novels, two children’s books and more than 100 technical papers.

Other than extensive writing of reports, proposals and technical documents, this is Fletcher’s first book.

“I learned a lot that I didn’t know or understand,” Fletcher admits. “I became convinced that global warming is a major threat to the environment and mankind. This is no Pearl Harbor or 9/11 wake-up call. It’s creeping up on us, and due to latency. Much of the damage done won’t become apparent for many years.”

Likewise, Smith revealed that he was surprised at the speed and “extent to which polar, Arctic and glacier ice has been lost in the last few years.”

Another surprise was the scale of duplicity that has been practiced by the major oil companies over the last several decades. He learned that “not only did they know of the (global warming) problems, but had taken steps to protect their own facilities while telling the pubic that there was nothing to worry about.”

Asked what was particularly troubling to them, Smith identified two items: latency and tipping points.

“Due to latency, even if we stopped greenhouse gas emissions today, global warming would continue to increase for decades, due to the long residence time of greenhouse gasses currently in the atmosphere. The second troubling fact is that there are a number of ‘tipping points,’ which if surpassed can lead to sudden and irreversible increases in global warming and its effects.”

Entrepreneurs succeed because they learn as much as possible about the competition they’ll face, then design a product or service sufficiently differentiated from the others.  In their researches, Smith and Fletcher learned that there’s a plethora of books (and other media) that focus exclusively on the ill effects of global warming and climate change. But they feel that their book is a complete treatment of the subject.

“We try to explain the important science of global warming and climate to concerned citizens who may not have much technological knowledge,” said Fletcher. “We show how this problem can be solved with today’s technology with a lot of supporting information and calculations.  And we present a specific and doable action plan to stop global warming.”

Certainly an academic undertaking, “Reaching Net Zero’s” price tag is reflective of the cost of a specialized college text: $136. That price is indicative of Elsevier’s limited publication numbers, and is quite possibly a dissuading cover price. However, Smith said that their sales strategy is to achieve a high degree of initial sales so that the publisher “recoups its initial investment quickly” and that the royalties or other income from sales of books “will be distributed to one or more nonprofit corporations to support climate change in education.”

As discouraging as global warming is to the well-informed individual, both authors remain more optimistic than most.

“We think that global warming is something we can do something about,” Fletcher opined.

“First, we don’t believe in doom and gloom, we see a bright future. Second, we have the technology today to do what is needed, and it’s cost effective and proven. Third, we need to take action immediately. Fourth, we cannot do it alone; there needs to be global cooperation with strong U.S. leadership.”

“Failure is an option.”

To order “Reaching Net Zero: What it Takes to Solve the Global Climate Crisis,” visit www.elsevier.com.