The annual Christmas Boat Parade may get national notoriety, but locally the home decorating contest known as Ring of Lights draws thousands of people who wander Balboa Island, Lido Island and other areas to view beautifully decorated bayside homes and businesses.

Residents compete in various categories, and often go all-out with decorations, which can include everything from roof-top animated scenes to dancing Christmas trees.

The two women from Jamaica, in town for a convention, simply couldn’t stop snapping photos of the joyous Christmas toy workshop scene so creatively displayed on the front patio of Shirley Pepys’ Balboa Island home.

“This is amazing,” enthused one executive. “It’s so happy,” chimed the other, as the two continued to smile and pose like runway models in front of Pepys’s penguin-centric exhibit.

Pepys estimates that every year “thousands of people pass by and take pictures” of her playful panorama of holiday-festooned seabirds.

That wasn’t the case 23 years ago, when the Pepys family first moved to the island and their only holiday decoration was a Christmas tree that she and her son, Noel, placed outside.

Over the years, Pepys said, the displays “grew to the point where we finally hired somebody to do this.” That “somebody” actually is the mother and aunt of audio technician Dillon Wells, who installed the custom sound system in Pepys’ home.

“On the Fourth of July, they texted me to announce that ‘We’ve started designing for you.’” In fact, Pepys said, “They’re already talking about next year.”

In the five months from initial concept to finished display, the ladies (mom Deanne Lemire and aunt, Darcy Hafner) custom-tailored every costume, every hat, and every piece of clothing for the penguins.

One of the props in the exhibit that drew uncommon attention last year was a mailbox to Santa, which had been placed at sidewalk level. Pepys decided to check the mailbox at the time she dismantled the scenery. Inside were “so many letters to Santa,” mostly from adults with both requests and thanks.

Pepys said her popular display is “my gift to all our visitors.”

And that gift migrates well beyond the south-facing big island esplanade, for Pepys was informed that her beloved penguins are now found “all over Facebook,” and doubtlessly all around the world. 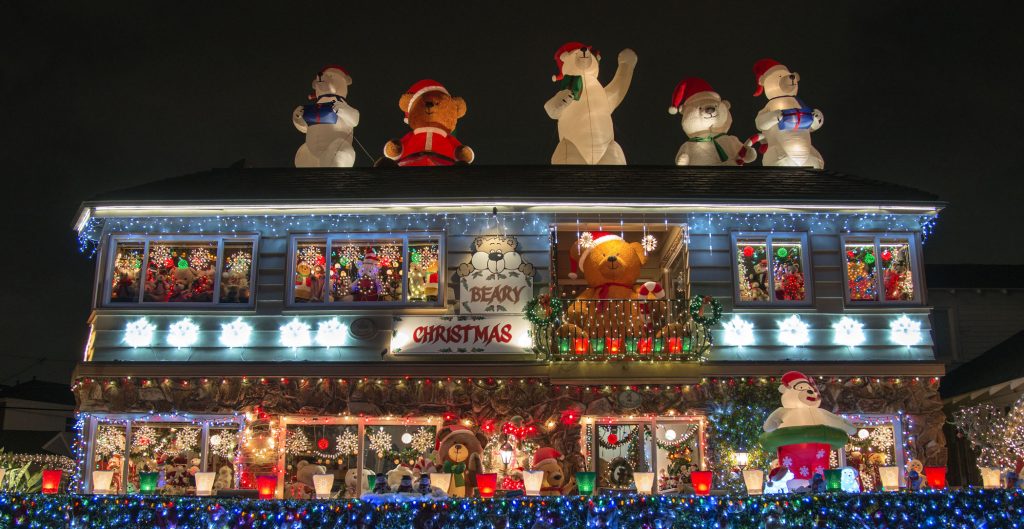 Grin and Bear It at Christmas / By Victoria Kertz

The “Bear House,” as 538 S. Bayfront is affectionately known year-round, is at 100 percent bear-ness this year.

Since moving to the house in 1993, the Cook Family has been wishing the world a Beary Christmas with their delightful Ring of Lights holiday spectacle, which never fails to win a Ring of Lights award.

“This year, the roof is all bears,” Marcy Cook said. “In the past, there have been snowmen or a Santa, but not this year!”

Cook, a math teacher, says her family owns exactly 3,999 bears. Not all of them celebrate Christmas though. Some are specific to other holidays and those cuddly cubs are currently hibernating in storage. So technically, the current holiday display totals around 2,500.

Most of the smaller ones are indoor bears. “Every single inch of our house is Christmas,” Cook said.

Years ago, the family’s bear decor was only on the inside. When they moved to the Bayfront address 23 years ago, they brought the whimsy of Christmas bears to Newport with an outdoor display that gets bigger and better each year.

The interior is just as fanciful as the exterior. “One bathroom is just for frogs,” she confirmed. She also dedicates one bedroom to her late son, who died of cancer, with a theme of angels. She begins decorating inside as early as October and this year, her outdoor “light-up day” was November 30.

Will she ever change to another theme? “No!” Cook laughed. “People would be screaming and wondering what happened.”

It would just be too much to bear. 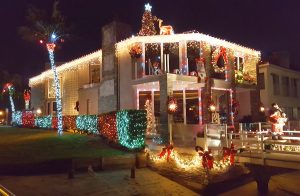 Essie and John Bootsma bought a house on Lido Island seven years ago, and decided to decorate their home for their first Christmas in Newport. They entered the Ring of Lights contest and won a First Time Entry award. They’ve been decorating, and winning awards, ever since.

“I make sure my house is completely decorated by Thanksgiving, because I want to make sure I can enjoy all 30 days of it,” said Essie. “When you put so many decorations up, I want to enjoy them.”

Others enjoy them too. Essie said that this week a boat passing by her home stopped and the passengers told her they loved her house and looked forward to it every year.

“That makes it so worth it,” said Essie.

Essie remembers one year when her home was being renovated. Not to be discouraged, Essie decorated the scaffolding surrounding the house—and still managed to win honorable mention.

The Lido Island home is one of two houses Essie decorates each year. She and her husband own a dairy farm in Lakeview, near Hemet, and stay there during the week. They spend the weekend on Lido Island.

“We always decorated our dairy home, but our first year at the beach house we hardly decorated the dairy, and people thought we had passed away,” laughed Essie.