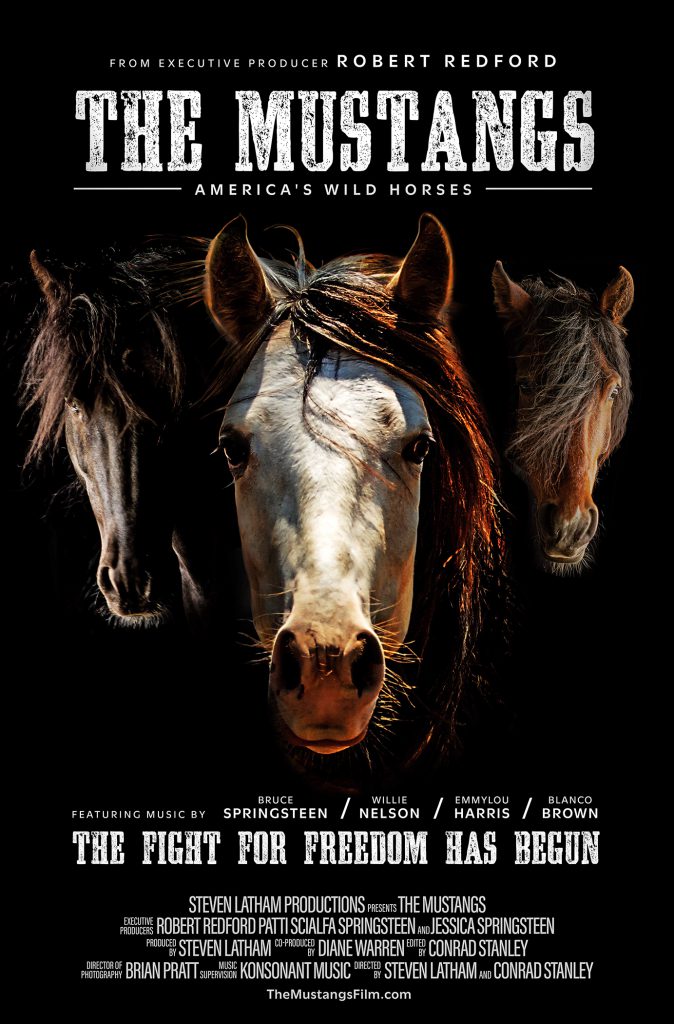 Any film that has Robert Redford, Patti Scialfa Springsteen and Jessica Springsteen as executive producers, and songs by Bruce Springsteen, Emmylou Harris, Willie Nelson and Diane Warren stands to be noticed.

What’s noteworthy is that the film is not about music, but about horses.

The documentary “The Mustangs: America’s Wild Horses” is a fascinating and colorful story about the wild Mustangs in America—their history, their current status and their future.

There are more than 80,000 wild horses on our public lands and more than 50,000 in government corrals. Sounds like a lot, and it is—but not when you discover there used to be more than two million wild horses roaming our country. Sadly, tens of thousands were captured and killed years ago, and turned into dog food.

However, the Mustangs have made a comeback, although their future is uncertain.

“America’s wild horses are fighting their last stand,” said Executive Producer Robert Redford in the film’s press material. “Increasing competition for our natural resources threatens our wilderness areas, our wild horses and other wildlife species. Horses are interwoven into the very fabric of what is America. What threatens them threatens us all.”

As the press material notes, some of the stories shared across the film include taking a woman who has trained mustangs for more than 10 years out to the range so she can experience where they came from; an organization that pairs up mustangs and veterans with PTSD; the work of a woman named “Wild Horse Annie” who mobilized an army of children 50 years ago to protect wild horses and save them from the brink of extinction; a group of incredible women who are implementing a fertility control program on the range; and a sanctuary that reunites wild horses that were rounded up from the wild.

“America’s wild horses represent freedom, strength and resilience,” said the film’s producer and co-director Steven Latham. “This film takes audiences on an exciting journey—a journey that we as filmmakers went on, to understand the challenges the Mustang faces to thrive in a changing world.”

The shots of the wild mustangs in their natural environment are gorgeous, the interviews interesting in that they reveal various aspects of training or protecting the mustangs.

There’s a fascinating section of the film about Operation Wild Horse, an organization, that pairs mustangs and veterans with PTSD.

Penske Media Corp Vice Chairman, Gerry Byrne, a Marine Corps Vietnam Veteran and prominent veterans’ activist, comments, “The Mustangs highlights the importance of addressing the pressures of PTSD and the ‘hidden wounds of war.’ I commend the film for showcasing the work of veterans who are making a difference.”

The goal, according to interviewees, is a stable wild horse population, and that the horses “will not have to be removed from the only home they have ever known.”

Robert Redford has the parting words of the film: “We have the ability to create a proud future for the American mustang. My hope is that the strong, resilient spirit of these wild horses will inspire solutions that ensure their survival and a lasting home on our public lands. By working together we can preserve their legacy and celebrate their freedom for generations to come.”

“The Mustangs: America’s Wild Horses” screens on Thursday, Oct. 28 at 7:30 p.m. at the Starlight Triangle Cinemas. Visit NewportBeachFilmFest.com for tickets.